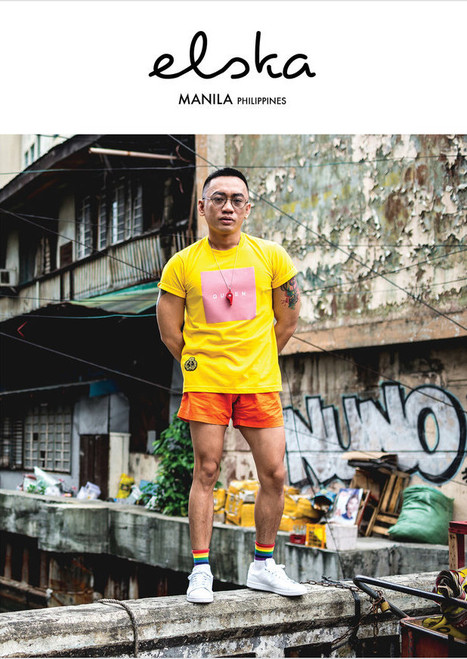 Elska Manila is our twenty-fifth issue and also our sixth trip to Asia, following our visits to Taipei (Taiwan), Yokohama (Japan), Mumbai (India), Seoul (Korea), and Dhaka (Bangladesh). Over the past couple of years we received many requests from Filipino readers to visit their country and make an Elska there, and we finally decided to listen, here presenting you with your chance to get to know the bunch of local Manila residents we met, photographed, and got close to.

Perhaps surprising for a predominantly Catholic country, the men we met in Manila were anything but conservative. Each participant in Elska has the option to include nudity in their photoshoots and is welcome to write about any subject as long as the story they tell is true. The Manileños turned out to be particularly open and unabashed by sex or sexuality, being uninhibited in their pictorials and often explicit in their tales. Interestingly Elska’s three issues with the most nudity are ‘Elska Guadalajara’, ‘Elska Bogotá’, and ‘Elska Manila’ — all largely Catholic countries and all former Spanish colonies. It's yet another example through Elska where preconceived ideas about people just don't work in reality.

The stories contributed by the Manila participants suggest a few potential attributes of the gay Filipino character. There’s a good deal of humour, a strong sense of being proudly out, and also a sometimes worrying amount of over-modesty and a tendency to be self-effacing. Some of the stories shared in ‘Elska Manila’ include: Paolo D’s piece about his struggle to find his own light in spite of the demons of mental illness; Bryill B’s tale of a lustful encounter on a very crowded rush-hour commuter train; Rej T’s story of going to a provincial family wedding and trying to escape the attention of bridesmaids hunting for a single man; Anton L’s text that admits how tired he is of hookup apps yet how he keeps using them anyway; and Jeff M’s story about trying unsuccessfully to stop loving a man who clearly doesn’t return his love.

Includes texts in English and Kinara-ya (followed by English translations)