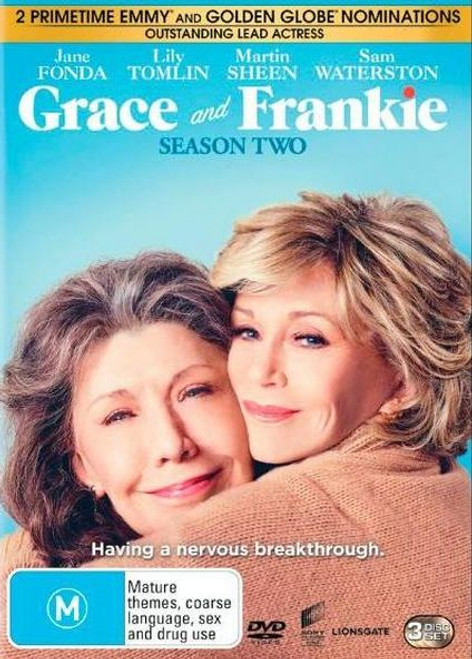 Following on from the success of Season One, Grace (Jane Fonda) and Frankie (lesbian icon Lily Tomlin) continue to drive each other crazy even as they support each other through the trials and tribulations of life after their divorces from ex-husbands Robert (Martin Sheen) and Sol (Sam Waterston). After two decades of being secretly in love, the two men are finally getting married, which creates stress and strife for Grace and Frankie, who have to deal with the hurt and change of roles.

In their search for resolution, new relevance, and romance, Grace and Frankie learn that they can help and hinder each other, with laughter and tears along the way.

This hit Netflix series is both funny and touching, mining the humour that ensues when the uptight, martini-swilling, successful businesswoman Grace comes up against new-agey, pot-smoking hippy Frankie as they try to reboot their lives. With great subplots involving their ex-husbands and their dysfunctional children, this second season builds on the strengths of the first with even better writing and characterization. Executive produced by Fonda and Tomlin, and with stellar performances from both leading actresses and the supporting cast, this is a hilarious, poignant, and refreshing look at women in their seventies coping with love, life and the whole damn thing.

This is a 3 Disc Set

Grace and Frankie (Season One) DVD

The 57 Bus : A True Story of Two Teenagers and the Crime That Changed Their Lives

Lily and the Octopus (B Format Paperback)