Lesbians and the Law : A Guidebook for Australian Families 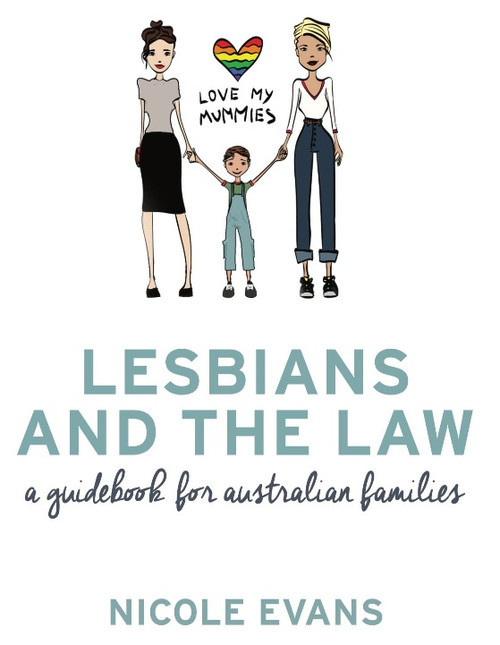 ''Lesbians and the Law'' is a guidebook for Australian lesbians to help them understand the laws as they relate to same-sex parenting. Still unable to get married in Australia, lesbians, and their children, are left exposed legally, socially and emotionally. And with the current debates raging around marriage equality, this book could not be more timely.

The book includes inspirational real life stories about lesbians in Australia who have created families in different ways. In addition, Nicole shares personal stories from her own experiences as a birth mother and non-birth mother.

Nicole  has written this book in a response to her own experience as a lesbian going through a civil union in the UK, the process of having a child with her partner, and then sadly going through a separation and having another child on her own. What Nicole discovered was that there was hardly anything to guide or support lesbians through same sex parenting, adoption, surrogacy, IVF, family breakdown, domestic violence and other issues.  Over the past nine years, she has accumulated knowledge of the gay and lesbian parenting process, and has acquired a broad understanding of the current law around same sex couples, their children, and donor rights.

“When my partner and I had a child, there were limited resources to help us understand the laws related to our situation. This is the book I wish I had when I was making those decisions early on in my family planning. I want to help other lesbians move through that complicated territory with knowledge to empower their decisions.”

Nicole Evans is a Principal Director at Sydney firm Uther Webster & Evans, and is a 36-year old lesbian, lawyer, and mother to two beautiful children. She is the legal writer for Lesbian Parenting Australia www.lesbianparenting.com.au and has taken on an activist role. “It’s time for Australia to recognize our families and to make marriage a truly equal institution. My book is about current laws but I would be happy to publish a new edition if it meant lesbians could legally marry.”

Gay and Lesbian, Then and Now : Australian Stories from a Social Revolution

Invisible Families : For Parents of Lesbian and Gay Children

Intimacy, Violence and Activism: Gay and Lesbian Perspectives on Australian History and Society

Letter of the Law

Les Biches DVD ( The Does )