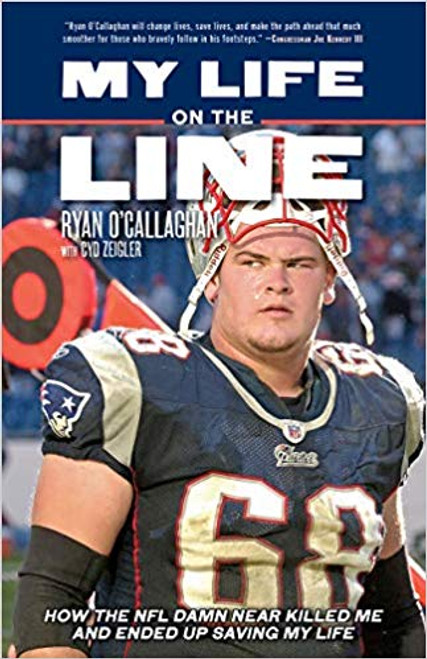 Ryan O'Callaghan's plan was always to play football and then, when his career was over, kill himself. Growing up in a politically conservative corner of California, the not-so-subtle messages he heard as a young man from his family and from TV and film routinely equated being gay with disease and death. Letting people in on the darkest secret he kept buried inside was not an option: better death with a secret than life as a gay man. As a kid, Ryan never envisioned just how far his football career would take him. He was recruited by the University of California, Berkeley, where he spent five seasons, playing alongside his friend Aaron Rodgers. Then it was on to the NFL for stints with the almost-undefeated New England Patriots and the often-defeated Kansas City Chiefs.

Bubbling under the surface of Ryan's entire NFL career was a collision course between his secret sexuality and his hidden drug use. When the league caught him smoking pot, he turned to NFL-sanctioned prescription painkillers that quickly sent his life into a tailspin. As injuries mounted and his daily intake of opioids reached a near-lethal level, he wrote his suicide note to his parents and plotted his death.

Yet someone had been watching. A member of the Chiefs organization stepped in, recognizing the signs of drug addiction. Ryan reluctantly sought psychological help, and it was there that he revealed his lifelong secret for the very first time. Nearing the twilight of his career, Ryan faced the ultimate decision: end it all, or find out if his family and football friends could ever accept a gay man in their lives.

"[O'Callaghan's] memoir vividly presents the painful process of kicking drugs and accepting his sexuality. For sports fans who haven't lived in fear of having their sexuality exposed, O'Callaghan's powerful narrative should trigger much-needed empathy...A fine book on an important subject, and a source of hope for a more accepting world."
--Booklist, Starred review

"O'Callaghan has written a gripping and complex examination of the ways in which bigotry and self-hatred walk hand in hand, and the ways in which the snares we set for ourselves are often more dangerous than the ones which others set for us. It's a shame that a book like this is still necessary. Thank goodness O'Callaghan wrote it."
--New York Journal of Books

"In this country, LGBTQ individuals face varying degrees of acceptance. Ryan O'Callaghan, a former offensive tackle for the New England Patriots and the Kansas City Chiefs, chronicles his struggle as a closeted gay man in the hypermasculine world of professional football in My Life on the Line, coauthored by Cyd Zeigler."
--Publishers Weekly, included in an LGBT preview/feature

The Secrets Of My Life (Paperback)

Tell Me Why: The Story of My Life and My Music