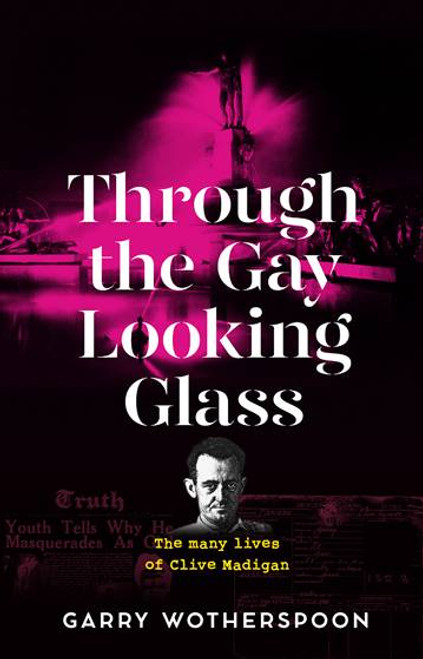 He was born and grew up in Sydney’s inner-city working class suburbs, a larrikin becoming, barely out of his teens, a member of the ‘Hyde Park Push’ [a group of camp men who drank at night around the Archibald Fountain and cruised other men there, while avoiding police]. He was soon organizing parties for them in the most unlikely suburban venues, and was later ‘outed’ in Sydney newspapers. Over much of the same time, he had an ongoing criminal career, which had started when he was a young teenager, and he consequently spent many periods in gaol.

Later, having fled Sydney for the ‘safety’ of north Queensland, he took to writing about ‘life’ and his adventures – almost an Antipodean Jean Genet.

The book reveals to us many long-hidden aspects of Sydney’s history, touching on its ‘camp’ world, its bohemian demi-monde, its criminal underworld, and life in our gaols.

The ‘memoir’ is also a meditation on memory, truth and fiction, and how the past can be variously seen.

"In Through The Gay Looking Glass, historian Garry Wotherspoon takes a bold step to follow the life of Clive Madigan, a central figure in the Sydney camp scene after the end of World War II. Best known as 'The Viscountess de la Clive,' Madigan joined the 'Hyde Park Push,' a group of camp men who drank and cruised other men around the Archibald Fountain in Hyde Park, before soon organizing parties for them in various suburban venues.

This historical project intriguingly dated back to the early 1990s when Madigan deliberately contacted the historian for joint authorship of Madigan's memoirs. Wotherspoon then received an unusual collection of materials that, despite the conflicting and historically inaccurate accounts written by Madigan in those records, offers an invaluable glimpse of the gay beat in the early post-war period of Sydney. As their partnership eventually fell out and Madigan disappeared from public awareness by the late 1990s, the former New South Wales History Fellow continued this project not only as usual historical research but also as a vibrant fabulation. Thus, the claim of accuracy dictates this project less, and instead, rather focused on the meditation on memory, truth, and fiction. We always recreate and understand our past from the present, albeit the incongruous recollections.

Born in a Sydney-based working-class family, Clive Madigan resented his own family, left school at fourteen, and since early teens, he had an ongoing criminal career and subsequently spent many periods in jail. A fierce opponent to respectable Australian society of that time, he lived many lives from slum boy, petty criminal, safe-breaker, 'the master of ceremonies,' and later in his older age, writer. His sense of resentment to the world might have been influenced by his family's pretensions to respectability, personal awareness of his homosexual tendency, and, perhaps, a 'loner' feeling as the only child. Nevertheless, Madigan's references to literature, evident in his final choice for the memoirs' title, might signal his acute imagination and breadth of creativity. Though his career might remind us of French artist and activist Jean Genet, who was well-known as a petty criminal with a sharp mind, Wotherspoon realizes that Madigan's work does not carry deep contemplation of the meanings and consequences of actions. "His stories are all on the surface of things," concludes the historian, while simultaneously recognizing Madigan's capability to string words together for impact.

Written in an accessible and eloquent style, this book provides not only excerpts of Madigan's first-hand stories and personal accounts but also a glimpse into a 'gay world' before the gay liberation movements emerged in Australia. Starting from under the floodlit of the Archibald Fountain, Clive 'The Viscountess' Madigan took the parties' center stage, making the camp world never be the same again."