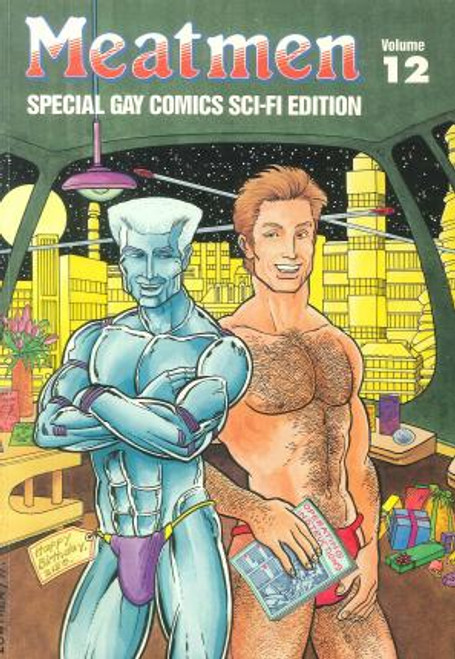 This volume of MEATMEN stands out from most for 2 reasons: it has fewer & longer features, and all have a sci-fi theme.

THE highlight of the book is "HOT PURSUIT", a 40-page opus by artist Stephen Lowther & writer Howard Stangroom (once a member of comics-a.p.a. KLORDNY). Heavy on plot, action & drama, the art is very much in the style of many 1970's Marvel comics, while having it broken into chapters was common among many early-1960's Marvels. Lowther also did both color covers, and alone his contributions would have made a terrific "Annual" in the old days.

"PROJECT EXODUS" is another epic, this one 31 pages in length, but made entirely of full-page illustrations by "Mike".

"CRYOGENICS" seems to have predicted the pilot episode of FUTURAMA by quite a few years, with its hero accidentally frozen, only to awake in a very different world-- where everyone is homosexual! There's been 2 sequels so far, in Vols.15 & 19.

"MASTER OF MASTERS" is something different from "Sean", whose excellent work has appeared in Vols. 1, 2, 6, 10, 12, 14 and 16-21. This time it's all full-page illustrations, which allow much more detail than usual. As I suspected, these "pulp"-style pages originally accompanied a story serialized in LEATHERMAN'S WORKBOOKS Vols. 2-8 (many MEATMEN features are reprints that appeared elsewhere, earlier). Some of the HOTTEST art in this book, these work even without the text!

Gerald Donelan contributes 10 of his always-delightful cartoons; Jeffrey A. Krell's humorous JAYSON has an adventure on another planet; Greg Garcia's "BIG BANG" involves black holes in space; and Kurt Erichsen's "ROBOT LOVE" involves a salesman trying to turn the tide away from mechanical sex BACK to the "organic" variety.

PLEASE NOTE : All remaining copies have some slight damage to the front cover, a mild stippling effect due to some of the pigment having been stuck to the back of other copies during long storage. the rest of the comic is in perfect condition.

Kiss Of Whip : Explorations in SM