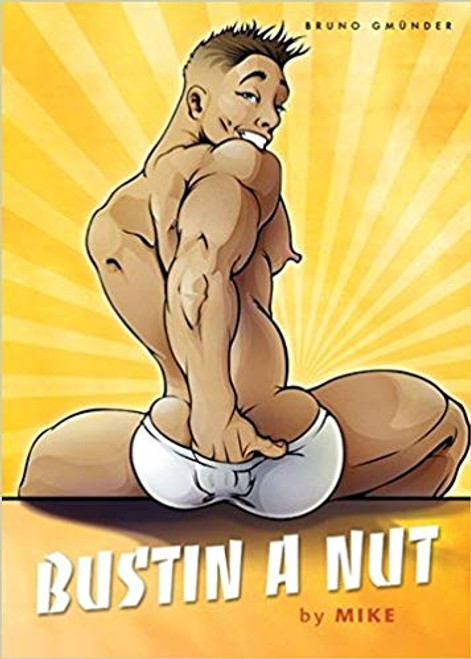 'Mike' is the full nom de plume of the artist whose works fill this entertaining book. In his notes at the end of the book Mike explains how he grew from a graduate from Rhode Island School of Design with a degree in Illustration and spent the early 1990s as a successful magazine illustrator, but unhappy with a 9-5 job that didn't serve his artistic dreams. In the tough times he began illustrating for Playgirl, then Mandate and then Advocate MEN, and it was through this progress that he arrived at his current status as one of the finest practitioners of erotic illustration. This is his first book devoted entirely to his genre and is aptly named BUSTIN A NUT - not only for the fact that all of these images deal with the definition of the title, but also because it stands as a hallmark for attaining his lifelong dream of drawing what he loves to draw.

And draw/paint Mike does with a flourish! Yes, the point of the imagery is most often the successful completion of a physical encounter, but that is only the thread that ties these images together. Considered individually these are paintings that have a startlingly strong sense of human anatomy, finding not only exceptional accuracy as figurative work but also a keen sense of communication through facial expressions and some physical distortions that would challenge an Olympic gymnast! His beefy characters are from all walks of life - sports, military, jungle scenes and sea scenes, executive suites and shadowy alleyways, forest scenes and indoor and outdoor moments during day and night. Though the focused topic is always arousal, Mike has the ingenuity to incorporate all manner of visual and mental subterfuge and social comments that truly enhance his art.

While some may find this book directed to a narrow audience, those readers would be avoiding the issue that much of what Mike is drawing is also comical and fun - celebrations of over the top encounters that are as entertaining to examine as they are sensual. Mike is a fine artist who takes the Tom of Finland look a giant step forward. He i an exceptional artist and gives the impression that all of this art is great good fun for him!