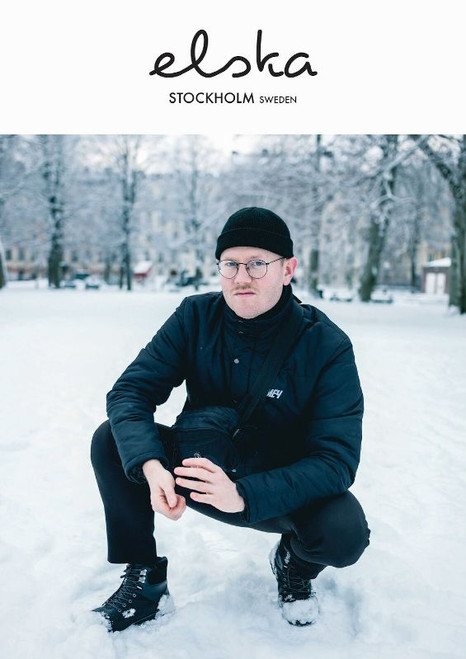 Elska Stockholm is our twenty-second issue and the first in our new bigger and better format, including a new paper stock, a textured cover with flaps, a more spacious layout, and a larger page size and increased page count. If you don't already collect Elskas, then now is the time to start.

Stockholm is an incredibly beautiful city, set on a series of islands and full of grand old buildings and handsome streets. We chose to visit in the winter, hoping for a setting full of snow and ice, which we got. We also got some of the warmest and cosiest selection of images yet. The men we met were photographed wrapped up in hats and coats and scarves outside and then half-naked in cosy jumpers and nothing else at home, or in nothing at all (but with the heat cranked up).

Stockholm is our third issue set in the Nordic region (after Elska Reykjavík and Elska Helsinki) and there are definitely some similarities both in the looks of the men, in their attitudes, and in the stories they wrote. There's a coolness, perhaps even an aloofness about them, giving a sense in their personal stories that it wasn't easy for them to open up. There's also a certain shyness, or perhaps a lagom-influenced desire to be understated, which is apparent in the way that their images are more off-guard and relaxed than in images from some other Elska issues like Los Angeles or London. There's also a bit of sadness, or at least of tentativeness, in their stories, perhaps influenced by the fact that we met these men in the cold dark winter.

Inside this issue you'll get to know the real Stockholm through the experiences of a random set of men from the local LGBTQ community who we met during our visit. Each was photographed in a natural, documentary-like style in the city and in their homes, and each contributed a personal story to help you readers get to know them at an even more intimate level.

Some of the men you'll meet in Elska Stockholm include: