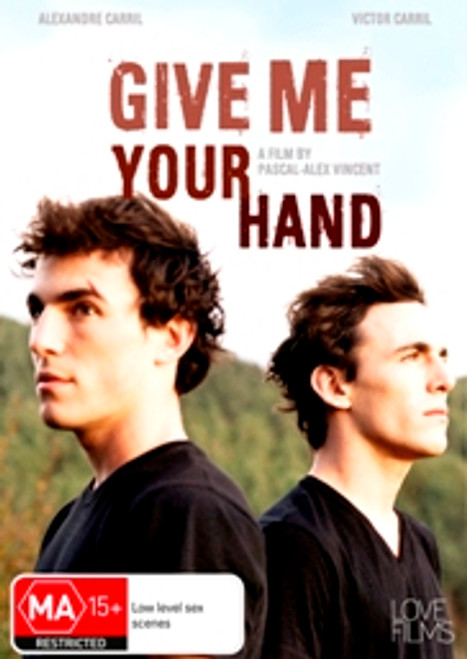 Handsome identical twin brothers Quentin and Antoine  come from a dysfunctional family, and when their mother dies in Spain, they decide to travel  from their  home in France  to attend the funeral of the mother they never knew. As they hitchhike towards Spain and encounter different situations on the road,  old grudges between the two teenagers resurface. Antoine is more successful and aggressive in pursuing the girls,  but then  the sensitive and artistic Quentin  meets Hakim, and makes an intimate  connection  with him. The more  tempremental  Antoine begins to exhibit  jealous and possessive behaviour, and  increasingly hostile,  he cruelly ditches Quentin, but soon realises that he can't make it to Spain without his brother by his side.

A tense yet haunting account of brotherly love and independence, Give Me Your Hand is Pascal-Alex Vincent's first feature film, after numerous acclaimed shorts -   his   short Baby Shark won the Palme d'Or Short Film at the Cannes Film Festival. This is another of those films which the French do so well - beautifully shot, emotionally and sexually charged, and with lead actors who are prepared to unabashedly bare body and soul for the camera!