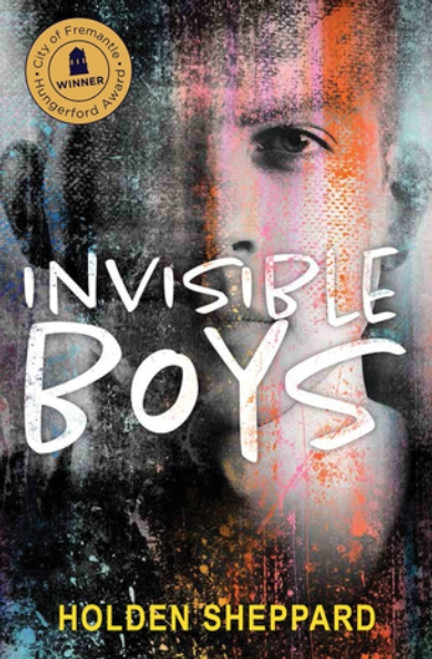 Invisible Boys is a raw, confronting YA novel, tackling homosexuality, masculinity, anger and suicide with a nuanced and unique perspective. Set in regional Western Australia, the novel follows three sixteen-year-old boys in the throes of coming to terms with their homosexuality in a town where it is invisible – and so are they. Invisible Boys depicts the complexities and trauma of rural gay identity with painful honesty, devastating consequence and, ultimately, hope. In a small town, everyone thinks they know you: Charlie is a hardcore rocker, who's not as tough as he looks. Hammer is a footy jock with big AFL dreams, and an even bigger ego. Zeke is a shy over-achiever, never macho enough for his family. But all three boys hide who they really are. When the truth is revealed, will it set them free or blow them apart?

"This debut novel from a young West Australian writer has already enjoyed award success before it was even published, winning the City of Fremantle Hungerford Award 2018 - and it is easy to see why. The book is immediately engaging and engrossing as it explores the lives of three diverse male teenagers dealing with their gay sexuality. Although the book is marketed as young adult fiction, it could just as readily be aimed at all readers, as it is a sophisticated read and not at all muted in its content. At well over 300 pages, it’s also substantial, whereas many young adult novels are considerably slimmer. The three lead characters are Charlie, Zeke and Hammer. Charlie is an aspiring rock musician and alternative figure in his Geraldton high school, who is outed when an online hook-up is dramatically interrupted and becomes the talk of the town. Zeke is a studious geek from a traditional Italian family who feels overshadowed by his immensely popular older brother who is about to get married. While Hammer is a narcissistic, muscular footy jock, who has serious prospects of being drafted for the AFL, though his ‘phase’ of being attracted to men is tormenting him more and more. All three storylines are equally compelling with strong, credible characterisation - though all of the novel’s characters are strongly drawn, even the secondary and supporting characters. Primarily the book is a story of coming out, yet as it explores three very different contemporary journeys - a public outing, parental discovery, and denial - it manages to make this well-worn genre seem fresh, authentic, and engaging. The novel is also distinguished by its distinctive small Western Australian coastal town setting and a well constructed and truly surprising climax. It’s unquestionable that Holden Sheppard will win himself a vast number of number of fans and readers with Invisible Boys, but he also seems destined to win more literary awards and most deservedly so." Reviewed by Graeme Aitken