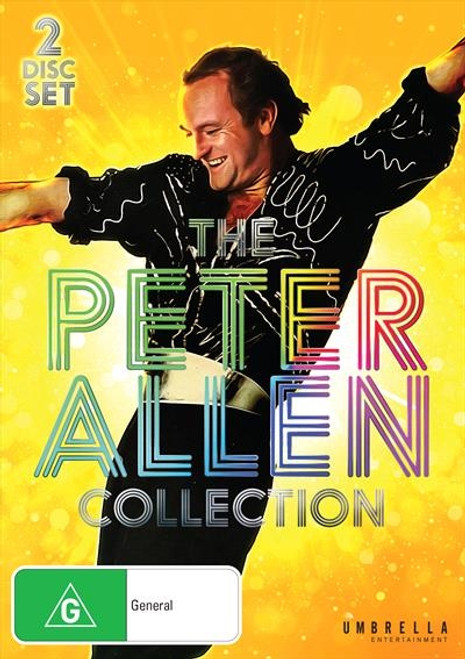 THE BOY FROM OZ - Australian-born PETER ALLEN had one of the all-time classic international show business careers making a name for himself with songs such as I Go To Rio, I Still Call Australia Home and the Academy Award-winning Best That You Can Do (Arthur's theme). Always remembered for his exuberant and energetic style, his life also brings into focus some of the broader social issues of the age. Featuring footage covering thirty years of his life this DVD depicts his personal story and includes many of Peter's famous friends such as Harry Connick Jnr, Bette Midler, Bernadette Peters, Ann Margaret, Carole Bayer Sager, Judy Stone, Lana Cantrell and Trish Noble.
A CELEBRATION - The original Boy from Oz and international superstar Peter Allen captured the imagination of audiences from an early age. Singing alongside Chris Bell in the early 1960s as one half of the popular duo The Allen Brothers, Peter was a born performer ready to take on the world. This entertaining program captures some of those formative years on Bandstand and tracks the singers remarkable career on Australian television, including interviews, spanning some thirty years of appearances on GTV9. From the Bandstand with Brian Henderson archives catch The Allen Brothers perform The Work Song, There's Never Been A Girl Like You (1962), Like Young, Go Tell It To The Three Eyed Man, Peppermint Twist, Twistin' Sydney Way (with Lana Cantrell) (1963). From The Don Lane Show: I Honestly Love You (1977), Bi-Coastal, I'd Rather Leave While I'm in Love (1980), One Step Over The Borderline, I Could Have Been a Sailor (1981), Arthur's Theme (1982). From The Midday Show with Ray Martin : When I Get My Name in Lights, Don't Wish Too Hard (1990), and his final single release Tonight You Made My Day (1991).

Title: Boy From Oz / A Celebration | Peter Allen Collection, The

Peter Allen - Not The Boy Next Door DVD

The Origin of Me