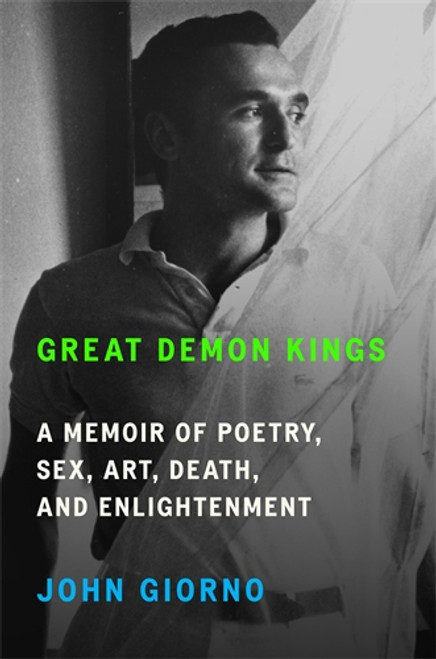 When he graduated from Columbia in 1958, John Giorno was handsome, charismatic, ambitious, and eager to soak up as much of Manhattan's art and culture as possible. Poetry didn't pay the bills, so he worked on Wall Street, spending his nights at the happenings, underground movie premieres, art shows, and poetry readings that brought the city to life. He began an intense romantic relationship with Andy Warhol, starring in his first movie, Sleep. Giorno then found himself involved with Robert Rauschenberg and later Jasper Johns, both relationships fueling his creativity. He quickly became a renowned poet in his own right, working at the intersection of literature and technology, freely crossing genres and mediums alongside the likes of William S. Burroughs and Brion Gysin.

Twenty-three years in the making, and completed shortly before Giorno's death in 2019, Great Demon Kings is the memoir of a singular cultural pioneer: an openly gay man at a time when many artists remained closeted and shunned gay subject matter, and a devout Buddhist whose faith served as a rudder during a life of tremendous animation. Studded with appearances by nearly every It-boy and It-girl of the downtown scene (including a moving portrait of a decades-long friendship with Burroughs), this book offers a joyous, life-affirming, and sensational look at New York City during its creative peak, narrated in the unforgettable voice of one of its most singular characters.

"The creativity and debauchery of gay artists and writers blooms in this exuberant memoir of avant-garde New York from the 1950s through the 1990s . . . An engrossing, passionate ode to a revolution in art and sensuality." ―Publishers Weekly (starred review)

"The ultimate scenester of midcentury Manhattan, lover to a who's who of gay artists and writers, tells all in a posthumous memoir . . . Upbeat, funny, unsparing, and way over the top . . . probably a lot like the man himself." ―Kirkus Reviews

"If you want to know every scandalous detail about everyone who was anyone in the brilliant creative whirlwind that was 1960s and '70s downtown Manhattan (and believe me, you do) you must read this memoir.” ―Edmund White

"Carrying on a wisdom tradition in American letters―striking, most recently, in the works of Allen Ginsberg and William Burroughs―John Giorno is a cosmic treasure. His Great Demon Kings is valiant, hysterical, unpretentious, sexy, gossipy, wise, and true." ―Brad Gooch