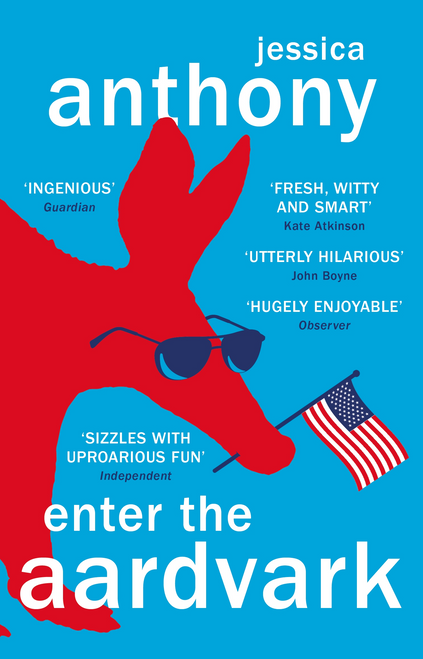 Refreshing different, highly inventive, witty and moving, ENTER THE AARDVARK is an absolute original. A budding politician’s career is put in jeopardy when he receives a large stuffed aardvark in the post. Brilliant and funny, a biting satire about politics, love, and taxidermy for fans of Jennifer Egan, Jonathan Franzen and Joshua Ferris.

Only one thing stands between Alexander Paine Wilson and his destiny… and it has long ears, spoon-like claws and a tubular snout...Republican congressman Alexander Paine Wilson is determined that nothing will stop him in his campaign for re-election. Not the fact that he is a bachelor, not the fact that his main adversary Nancy Beavers – married, with children – is rising in the polls. Nothing. That is, until one hot day in August, he receives a large parcel via FedEx. Inside is a gigantic taxidermied aardvark.

This aardvark has a surprising history – from the Victorian naturalist who discovered it to the taxidermist who deemed it his finest creation. But for Wilson, the entrance of the aardvark sets off a chain of events that threaten to ruin his entire career.

Constantly surprising, brilliantly comic and piquantly provocative, Enter the Aardvark is a tale for our times, a biting satire with a tender underbelly.

Reviewed and Recommended by Graeme :

"This very funny novel narrates two different storylines separated by almost 150 years, unfolds two gay love affairs, and links them with of all things, a taxidermied aardvark! The contemporary storyline features Representative Alexander Paine Wilson of Virginia, who is somewhat reminiscent of real-life American politician Aaron Schlock, who had a very negative LGBTIQ+ voting record but dazzled some with his good looks and gym-built body. This year Schlock came out officially as gay, confirming what had been suspected for years. Representative Wilson is similarly blessed with good looks and physique, and is utterly obsessed with Ronald Reagan. He has decorated his home and also himself with furniture and clothing from a photography book Images of Greatness that documents an intimate look at Reagan’s Presidency. And so he will happily spend $1900 on a canary-yellow Victorian sofa to emulate his hero. But Wilson has a problem which quickly cascades into a series of problems. He is up for re-election against failed mayoral candidate Nancy Beavers and his aides have been telling him to find a wife to improve his Favourability Rating. This leads him to break off the clandestine sexual affair he has been enjoying with charity fundraiser Greg Tampico. Not that Wilson is actually gay - he just became entangled in the pleasures Tampico offers somehow... Tampico responds by sending Wilson the taxidermied aardvark that was displayed in his bedroom and oversaw their sexual shenanigans. This aardvark has a long and complicated history and is integral to another gay love affair between zoological naturalist Sir Richard Ostlet and the taxidermist who created this object, Titus Downing. This short novel is an absolute delight, highly original and very funny. The only problem is that the contemporary narrative which unfolds Wilson’s escalating travails is so entertaining and so amusing, it tends to swamp the other storyline concerning Ostlet and Downing. Nevertheless, this is only likely to make the reader turn the pages all the faster!"

‘It’s a long time since I have enjoyed a novel so much. Fresh, witty and smart it also has a heart. What more could you want? And who would have thought that you could become emotionally attached to a stuffed aardvark?’ KATE ATKINSON