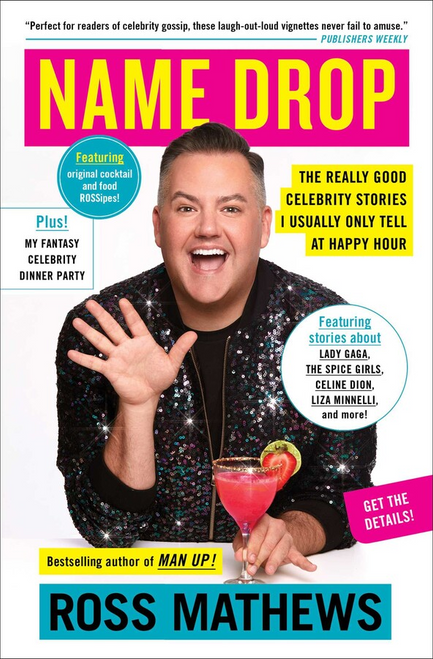 From Ross Mathews, the nationally bestselling author of Man Up!, judge on RuPaul’s Drag Race, and alum of Chelsea Lately, comes “a delightful mix of sweet and sour celebrity experiences” (Shelf Awareness) in this hilarious and irreverent collection of essays.

Pretend it’s happy hour and you and I are sitting at the bar. I look amazing and, I agree with you, much thinner in person. You look good, too. Maybe it’s the candlelight, maybe it’s the booze. Either way, let’s just go with it. Keep this all between you and me, and do me a favor? Don’t judge me if I name drop just a little.

Television personality Ross Mathews likes telling stories. He was always outrageous and hilariously honest, even when the biggest celebrity he knew was his favorite lunch lady in the school cafeteria. Now that he has Hollywood experience—from interning behind the scenes at The Tonight Show with Jay Leno to judging RuPaul’s Drag Race—he has a lot to talk about.

In Name Drop, Ross dishes about being an unlikely insider in the alternate reality that is showbiz, like that time he was invited by Barbara Walters to host The View—only to learn his hero did not suffer fools; his Christmas with the Kardashians, which should be its own holiday special; and his news-making talk with Omarosa on Celebrity Big Brother, which, as it turns out, was just the tip of the iceberg. Holding nothing back, Ross shares the most treasured and surprising moments in his celebrity-filled career, and proves that while exposure may have made him a little bit famous, he is still as much a fanboy as ever.

Filled with “charmingly told” (Booklist) tales ranging from the horrifying to the hilarious—and with just the right “Rossipes” and cocktails to go along with them—Name Drop is every pop culture lover’s dream come true.

“Ross is one of my favorite people in the whole wide world! He’s so lovely, funny, and smart.” —RuPaul

“Mathews is known for his distinctive voice, and fans will be pleased to see how well his gleeful corniness translates onto the page in this collection of charmingly told essays about celebrity close encounters….Each chapter starts with a ‘Rossipe,’ both for a cocktail and an hors d'oeuvre, which just adds to the party-like atmosphere of this pop-culture gab-fest of a book.” —Booklist

“With a sharp wit, television personality Mathews navigates a galaxy of Hollywood stars to deliver a hilarious collection of celebrity stories….Mathews’s unbound enthusiasm about his profession is infectious…and his stories are dishy but never cruel, making this a guilt-free treat. Perfect for readers of celebrity gossip, these laugh-out-loud vignettes never fail to amuse." —Publishers Weekly

The Devil You Know: A Black Power Manifesto