Everyday Violence: The Public Harassment of Women and LGBTQ People 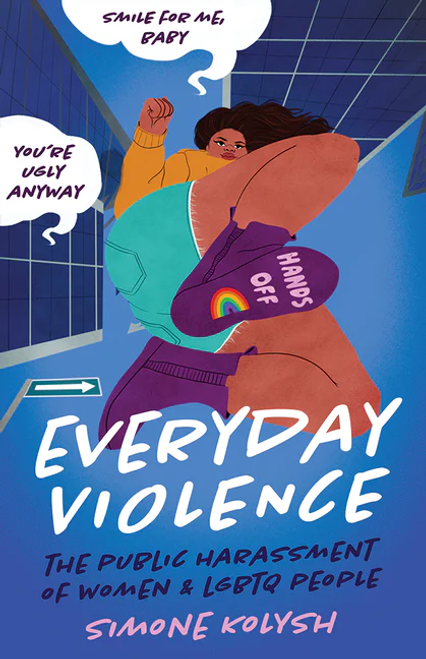 Everyday Violence is based on ten years of scholarly rage against catcalling and aggression directed at women and Lesbian, Gay, Bisexual, Transgender and Queer (LGBTQ) people of New York City.

Simone Kolysh recasts public harassment as everyday violence and demands an immediate end to this pervasive social problem. Analyzing interviews with initiators and recipients of everyday violence through an intersectional lens, Kolysh argues that gender and sexuality, shaped by race, class, and space, are violent processes that are reproduced through these interactions in the public sphere. They examine short and long-term impacts and make inroads in urban sociology, queer and trans geographies, and feminist thought. Kolysh also draws a connection between public harassment, gentrification, and police brutality resisting criminalizing narratives in favor of restorative justice. Through this work, they hope for a future where women and LGBTQ people can live on their own terms, free from violence.

"In this dazzling work of engaged scholarship, Simone Kolysh responds to a terribly pressing need: to understand anti-woman and anti-LGBTQ street harassment as related forms of public violence. Kolysh reveals these intersecting phenomena to be as unwieldy as they are ubiquitous, freighted with sexism, racism, transphobia, and class power. Yet change is possible, and Kolysh’s 'everyday' represents both the problem and the promise of the public realm."--Matt Brim, author of Poor Queer Studies: Confronting Elitism in the University

"Everyday Violence is a grounded, unapologetically feminist intersectional analysis of catcalling and LGBTQ-directed aggression on the New York City streets. Catcalling and LGBTQ-directed aggression are manifestations of overlapping systems of oppression and evidence of the widespread and normalized violence women and LGBTQ people face. Everyday Violence is a must-read for academics and activists fatigued of carceral feminism—who seek bold and innovative solutions to gendered and sexual violence based on transformative justice and community accountability."--Angela Jones, author of Camming: Money, Power, and Pleasure in the Sex Work Industry

The Lonely Stories: 22 Celebrated Writers on the Joys & Struggles of Being Alone

The End of Innocence

The Queerness of Home: Gender, Sexuality, and the Politics of Domesticity after World War II