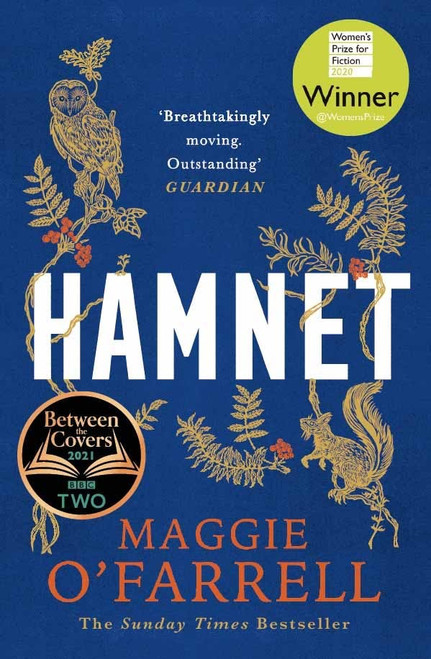 TWO EXTRAORDINARY PEOPLE. A LOVE THAT DRAWS THEM TOGETHER. A LOSS THAT THREATENS TO TEAR THEM APART.

On a summer's day in 1596, a young girl in Stratford-upon-Avon takes to her bed with a sudden fever. Her twin brother, Hamnet, searches everywhere for help. Why is nobody at home?

Their mother, Agnes, is over a mile away, in the garden where she grows medicinal herbs. Their father is working in London.

Neither parent knows that Hamnet will not survive the week.

Hamnet is a novel inspired by the son of a famous playwright: a boy whose life has been all but forgotten, but whose name was given to one of the most celebrated plays ever written.

"This magnificent historical novel has been honoured with numerous award distinctions and has deservedly won some of them. It was easily my favourite novel of 2020. It is a fiction based on the few scant facts known about William Shakespeare’s wife, Anne Hathaway, named here as Agnes and her son Hamnet. Shakespeare himself is never directly named. Agnes is an unusual woman in these times - some would call her a witch with her knowledge of plants and herbs and remedies for curing illnesses. But she also possesses the gift of premonition and can see her husband is meant for better things than making gloves and being bullied by his violent father. But all of Agnes’ powers are no match for the bubonic plague when one of her twin children falls ill. Ultimately this is a novel about grief and it is most powerfully and movingly depicted. However, the vibrant characters and the world they inhabit that is so vividly and pungently imagined bring a great depth to the storytelling. The novel’s climax is absolutely stunning, when Agnes learns that her husband is staging a new play in London, Hamlet, she flies into a rage. She cannot believe he would use her dead son in this way - but what unfolds is a testament to the power of the writer to transform grief into art and also to memorialise."

"Heartstopping. Hamnet does for the Shakespeare story what Jean Rhys did for Jane Eyre, inhabiting, enlarging and enriching it in ways that will alter the reader's view for ever." - Patrick Gale

"Blisteringly brilliant... You'll lap up this intricately told story of grief, love and the bond between twins." ― Cosmopolitan