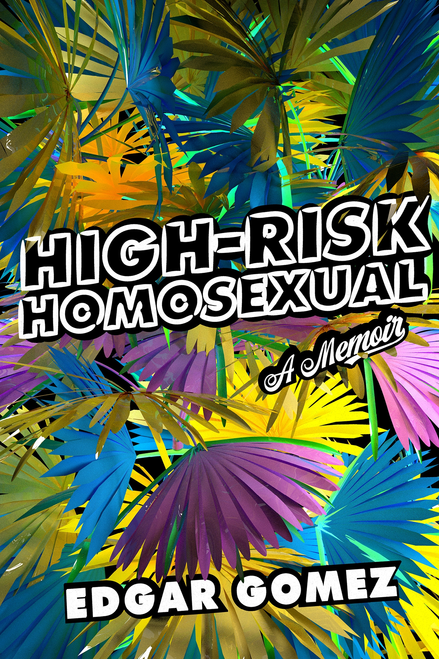 This witty memoir traces a touching and often hilarious spiralic path to embracing a gay, Latinx identity against a culture of machismo—from a cockfighting ring in Nicaragua to cities across the U.S.—and the bath houses, night clubs, and drag queens who help redefine pride

I’ve always found the definition of machismo to be ironic, considering that pride is a word almost unanimously associated with queer people, the enemy of machistas . . . In a world desperate to erase us, queer Latinx men must find ways to hold on to pride for survival, but excessive male pride is often what we are battling, both in ourselves and in others.

A debut memoir about coming of age as a gay, Latinx man, High-Risk Homosexual opens in the ultimate anti-gay space: Edgar Gomez’s uncle’s cockfighting ring in Nicaragua, where he was sent at thirteen years old to become a man. Readers follow Gomez through the queer spaces where he learned to love being gay and Latinx, including Pulse nightclub in Orlando, a drag queen convention in Los Angeles, and the doctor’s office where he was diagnosed a “high-risk homosexual.”

With vulnerability, humour, and quick-witted insights into racial, sexual, familial, and professional power dynamics, Gomez shares a hard-won path to taking pride in the parts of himself he was taught to keep hidden. His story is a scintillating, beautiful reminder of the importance of leaving space for joy.

"Through personal experiences and intimate encounters with his family and queer friends, Edgar Gomez explores gayness, femininity (and masculinity), belonging, and other first time gay experiences — from coming out, stripping, doing PrEP, to cruising. With candour and humour, he takes readers to Nicaragua and Florida, including the Orlando’s Pulse gay nightclub and steamy bath-houses. He examines both the beauty and messiness of young gay life, like accidentally falling unconscious while having sex with a hot guy in the shower! Amidst brief sexual episodes at the steam room and the backseat of cars, at the centre of this memoir is a sharp yet lively critique of masculinity. Gomez resisted the lessons on how to be a ‘man proper’ from his uncles and stepdad and instead found happiness in his mother’s make-up and rom-coms starring Jennifer Lopez. He tenderly admits to a long-buried longing for Hector, his older brother, to say out loud that he accepts and loves his little brother, despite their unwritten rules not to discuss Gomez’s sexuality. The title ‘High-Risk Homosexual’ comes from an episode where he was identified as a ‘high-risk homosexual’ when applying to obtain PrEP, leading him to figure out what ‘gay sex’ means in the past, present, and future. If the history of the AIDS crisis was rife with tragedy, he suggests that with PrEP we can “write something new” with hope. Brimming with optimism, Gomez has written not only a memoir but also a vision for all of us who dare to live as who we are. This is an ideal book for adult gay men who may still be struggling to embrace their sexuality."

“High-Risk Homosexual is a keen and tender exploration of queer identity, masculinity, and belonging. From the cockfighting ring in Nicaragua, where he was taken by his uncles to learn how to be a man, to the Pulse Night Club in Orlando, where he witnesses freedom and joy on the dance floor, Edgar Gomez writes with honesty and humor about the difficulty of straddling boundaries and the courage of finding oneself. This book signals the arrival of a major new talent.” —Laila Lalami, author of Conditional Citizens: On Belonging in America and The Other Americans