King of Hearts: Drag Kings in the American South 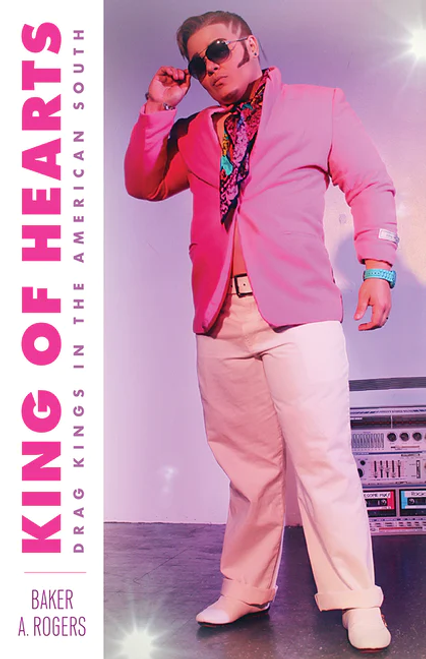 While drag subcultures have gained mainstream media attention in recent years, the main focus has been on female impersonators. Equally lively, however, is the community of drag kings: cis women, trans men, and non-binary people who perform exaggerated masculine personas onstage under such names as Adonis Black, Papi Chulo, and Oliver Clothesoff.

King of Hearts shows how drag king performers are thriving in an unlikely location: Southern Bible Belt states like Tennessee, Georgia, and South Carolina. Based on observations and interviews with sixty Southern drag kings, this study reveals how they are challenging the region’s gender norms while creating a unique community with its own distinctive Southern flair. Reflecting the region’s racial diversity, it profiles not only white drag kings, but also those who are African American, multiracial, and Hispanic.

Queer scholar Baker A. Rogers—who has also performed as drag king Macon Love—takes you on an insider’s tour of Southern drag king culture, exploring its history, the communal bonds that unite it, and the controversies that have divided it. King of Hearts offers a groundbreaking look at a subculture that presents a subversion of gender norms while also providing a vital lifeline for non-gender-conforming Southerners.

"If you live on the fringe of society and challenge its most predominant norm, the majority isn't going to tell your story, or frankly, even know you exist. It's up to us to tell our own stories and Roger's brilliant book does just that. They share their story as well as the unique experience of Southeastern drag kings. They're taking up space, showcasing a specific demographic, and leading the way for others. The Kings have come."--Murray Hill, New York City drag king and comedian
"King of Hearts is a readable and accessible adventure in the world of drag kinging, gender bending, and transmasculine life in the South. The author locates the spectacular performances of these drag kings within the place where they live and the rich history of drag kinging in the American South. If you are interested in being a drag king, understanding shows, or expanding your ideas about gender and sexuality, this is the book for you."--Amy L. Stone, author of Cornyation: San Antonio's Outrageous Fiesta Tradition
×

The Life and Comics of Howard Cruse: Taking Risks in the Service of Truth