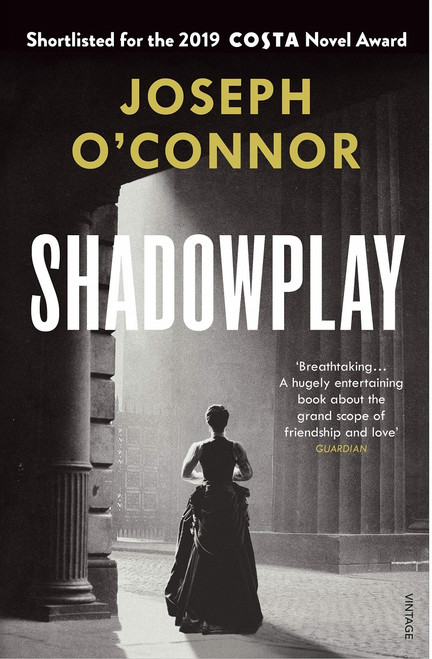 Winner of the Irish Post Easons Novel of the Year

A magnificent new novel from the bestselling author about Bram Stoker's intense relationships with the actors Henry Irving and Ellen Terry, while working together at the Lyceum Theatre, and the inspirations that led to the creation of Dracula.

Discover the thrilling life of Bram Stoker, the man who created Dracula, in this immersive historical novel.

1878: The Lyceum Theatre, London. Three extraordinary people begin their life together, a life that will be full of drama, transformation, passionate and painful devotion to art and to one another. Henry Irving, the Chief, is the volcanic leading man and impresario; Ellen Terry is the most lauded and desired actress of her generation, outspoken and generous of heart; and ever following along behind them in the shadows is the unremarkable theatre manager, Bram Stoker.

Fresh from life in Dublin as a clerk, Bram may seem the least colourful of the trio but he is wrestling with dark demons in a new city, in a new marriage, and with his own literary aspirations. As he walks the London streets at night, streets haunted by the Ripper and the gossip which swirls around his friend Oscar Wilde, he finds new inspiration. But the Chief is determined that nothing will get in the way of his manager’s devotion to the Lyceum and to himself. And both men are enchanted by the beauty and boldness of the elusive Ellen.

This exceptional novel explores the complexities of love that stands dangerously outside social convention, the restlessness of creativity, and the experiences that led to Dracula, the most iconic supernatural tale of all time.

"Irish author Joseph O’Connor (brother of singer Sinead O’Connor) has a string of popular books to his name, but his latest novel Shadowplay will have a special appeal to gay readers. It’s especially fascinating as it explores the life of an author that people generally know little about (Bram Stoker), although his book (Dracula) is one of the world’s most famous. Yet it only achieved this fame after the death of its author. Shadowplay is largely set around a London theatre, the Lyceum, and explores Stoker’s complicated relationships with the famous real-life actors Henry Irving and Ellen Terry. O’Connor depicts Bram Stoker as a closeted gay man, and he had very good reason to remain closeted. This is the time of Oscar Wilde’s downfall and Wilde flounces into the pages of the book for a couple of cameos, and even throws around hints of an intimacy with Stoker. Henry Irving is also affected by the Wilde scandal, and although both Irving and Stoker are married to women, they share an intimacy that transcends their work together. The novel opens with the two of them travelling together and for all intents and purposes they appear as a devoted elderly couple - then, we step back in time and learn their full story. Stoker and his family departing Ireland for London, him falling in with Henry Irving to run his theatre and trying to steer and contain this ‘star’ and all of his grandiosities, and Stoker’s own frustrations at failing to achieve success with his writing. The book is written in the style of a Victorian novel and the abundance of description truly creates a very atmospheric and pungent portrait of Victorian London. Add in Jack the Ripper, stalking the East End, and terrifying the populace, and you also begin to see how Dracula came to be written. But many details ferment in Stoker’s subconscious and find their way into his famous book. This superb historical novel ultimately depicts the satisfactions and torments of ‘the creative life’ and it is especially sad and moving that Bram Stoker never knew his own success. Thankfully, his legacy was saved due to his long suffering wife’s shrewd grasp of copyright."

"Stoker has anxiety dreams about same-sex desire and writes to Walt Whitman about problems in his marriage, the causes of which “one would shy from committing to paper” amid the 1895 prosecution of Oscar Wilde, an acquaintance of Stoker’s. Appropriately, Shadowplay doesn’t stick entirely to realism, with gothic interludes featuring a murdered maidservant watching on as Stoker taps out Dracula in after-hours writing sessions." -Anthony Cummins, The Guardian