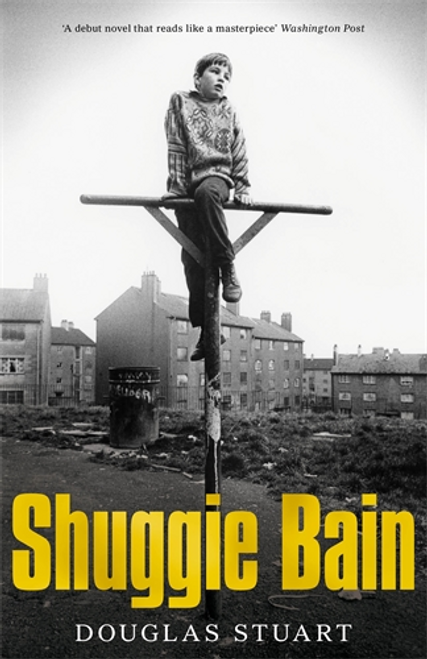 An Observer 'Best Debut Novelist of 2020'

It is 1981. Glasgow is dying and good families must grift to survive. Agnes Bain has always expected more from life. She dreams of greater things: a house with its own front door and a life bought and paid for outright (like her perfect, but false, teeth). But Agnes is abandoned by her philandering husband, and soon she and her three children find themselves trapped in a decimated mining town. As she descends deeper into drink, the children try their best to save her, yet one by one they must abandon her to save themselves. It is her son Shuggie who holds out hope the longest.

Shuggie is different. Fastidious and fussy, he shares his mother’s sense of snobbish propriety. The miners' children pick on him and adults condemn him as no’ right. But Shuggie believes that if he tries his hardest, he can be normal like the other boys and help his mother escape this hopeless place.

Douglas Stuart's Shuggie Bain lays bare the ruthlessness of poverty, the limits of love, and the hollowness of pride. A counterpart to the privileged Thatcher-era London of Alan Hollinghurst’s The Line of Beauty, it also recalls the work of Édouard Louis, Frank McCourt, and Hanya Yanagihara, a blistering debut by a brilliant writer with a powerful and important story to tell.

"Longlisted for the 2020 Man Booker Prize and set in the 1980s Glasgow and, Shuggie Bain traces the life of Agnes Bain and her youngest son, Hugh 'Shuggie' Bain, who are struggling to somehow become 'normal people' amidst an economic turmoil. The ascendency of Margaret Thatcher's policies has robbed husbands and sons from their work and sources of livelihood, subsequently not only sending them to precarity but also increasingly disintegrating their families. Coping with crushed dreams and betrayals from her husband and lovers, Agnes has been unrepentantly reliant on extra-strong lager to help her bearing with pain, sorrow, and failures. Swaying between sobriety and inebriation is her love for her sons and daughter, which does not always harbour the right languages and gestures for its expressions, leaving Agnes alone with Shuggie that has promised to stay after his siblings are all gone. In a very young age, Shuggie meanwhile must not only be self-sustaining but must also leap into the dark side of the city brimming with sexual harassment, violence, alienation, and equally, bullying from his peers due to his 'abnormally' soft demeanour. Even in some challenging situations, the young boy must compromise and use his own body as a way to escape. This grim and depressing landscape, however, does not the only thing that this novel offers. Douglas Stuart is a masterful storyteller which elegantly blends an astute observation, a robust yet tender character development, as well as visceral prose, making this realist novel become more than just a commentary about addiction, despair, and a dissipating working-class family during the economic crisis. This is also an invitation for a closer examination of both hope and hopelessness experienced by people trapped in debilitating circumstances. Despite their despair, Agnes and Shuggie attempt to dance together at home, imagining a better future and unexpressed happiness. While readers might be staggering in the beginning because of the Scottish vernacular, Douglas Stuart writes a gripping novel, that will leave lucid visceral imprints at the readers' hearts. After a few years of waiting for a story that has the same level of intensity as Hanya Yanagihara's A Little Life (2015), Stuart's Shuggie Bain has finally and successfully mended such a yearning."