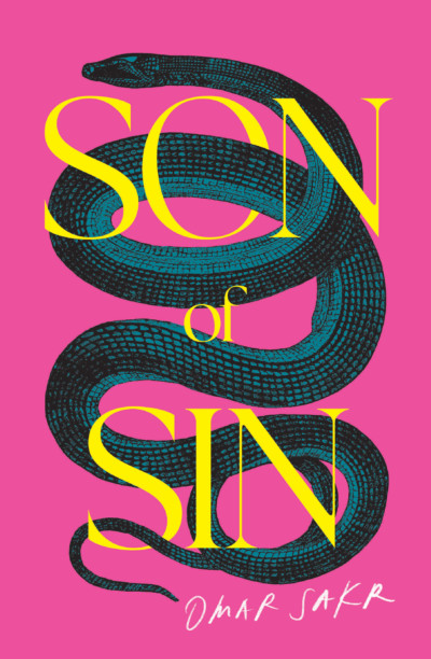 Poet Omar Sakr’s debut novel is a fierce and fantastic force that illuminates the bonds that bind families together as well as what can break them.

An estranged father. An abused and abusive mother. An army of relatives. A tapestry of violence, woven across generations and geographies, from Turkey to Lebanon to Western Sydney. This is the legacy left to Jamal Smith, a young queer Muslim trying to escape a past in which memory and rumour trace ugly shapes in the dark. When every thread in life constricts instead of connects, how do you find a way to breathe? Torn between faith and fear, gossip and gospel, family and friendship, Jamal must find and test the limits of love.

In this extraordinary work, Omar Sakr deftly weaves a multifaceted tale brimming with angels and djinn, racist kangaroos and adoring bats, examining with a poet’s eye the destructive impetus of repressed desire and the complexities that make us human.

Son of Sin by Omar Sakr tells the story of growing up queer and Muslim in a constant state of dispossession. The story begins with Jamal as a 14-year-old boy, the son of immigrants in Sydney, Australia, trying to come to terms with his budding queerness while being a good Muslim. As he grows up, he slowly asserts and accepts the weight of his identity while surviving abuse and homophobia from his family. As the title suggests, the theme of sin runs strong in the book, knowledge and queer love intertwined into a forbidden fruit from a ‘tree of sin’. ‘[W]hat was dread if not desire’s other face,’ writes Sakr, contemplating the fear and potential pain that comes from these unrealised yearnings. Sakr intricately weaves the complex emotions of repression, alienation and belonging, asking: what is it to belong as a brown person born in a white colonised country? What is it to belong in a devout Muslim family, as a queer person, as a sin? When do we ever hear of Muslim sexuality, let alone a queer narrative? Son of Sin draws this important and powerful untold narrative into being and articulates the experience of feeling like an outcast in your community. Simultaneously heavy and beautiful, this novel will appeal to fans of Ocean Vuong and to anyone interested in the intersections of race, sexuality and religion." George Banach-Salas, Australian Bookseller and Publisher

Since I Laid My Burden Down