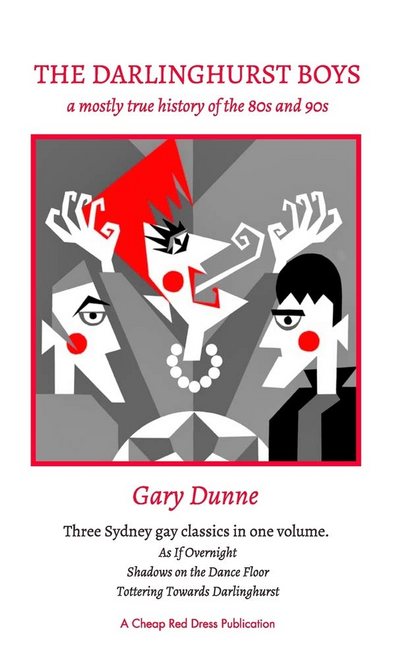 A mostly true history of the 80s and 90s

Three gay classics in one volume

The Big W, legendary nightclub glamour star, invites four friends for lunch atop Centrepoint Tower. It’s a prelude to 1985, the year when everything changes. This is the story of what happens to their world.

SHADOWS ON THE DANCE FLOOR

“Where there’s hair, there’s hope,” states Mr Pointy Head, inner-city survivor, shoplifter and owner of three milk crates of second hand men’s undies. Back in 1985 he and Grace went for HIV blood tests together. Now, in 1990, for the first time, their different results really begin to matter.

It’s the mid-90s and Simon (aka Grace) is on his way to the Diva Awards night with The Big W. She’s heard she’s likely to be presented with some gong or other for centuries of service, both on stage and in the epidemic front-lines.

Initially appearing in magazines, then published in various books, Gary Dunne's fiction of the 80s and 90s captured a very Australian response to HIV/AIDS with honesty, insight and humour. Now collected in one volume, they tell an insider's history of a community where illness and death became common aspects of daily living, and how that community evolved over those decades.