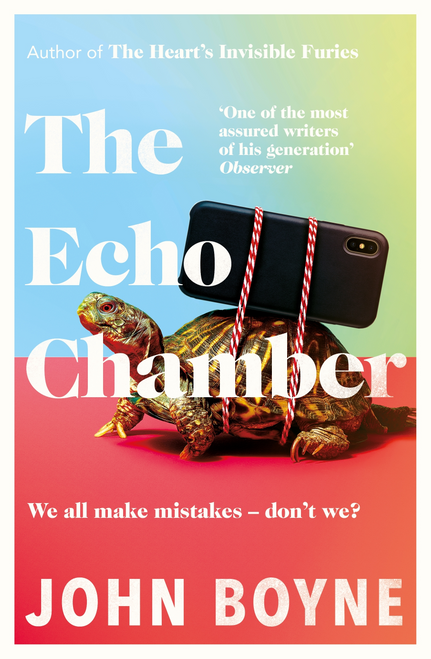 From the author of The Heart's Invisible Furies and powered with the Boyne's characteristic humour and razor-sharp observation, The Echo Chamber is a satiric helter skelter, a dizzying downward spiral of action and consequence, poised somewhere between farce, absurdity and oblivion.

What a thing of wonder a mobile phone is. Six ounces of metal, glass and plastic, fashioned into a sleek, shiny, precious object. At once, a gateway to other worlds - and a treacherous weapon in the hands of the unwary, the unwitting, the inept.

The Cleverley family live a gilded life, little realising how precarious their privilege is, just one tweet away from disaster. George, the patriarch, is a stalwart of television interviewing, a 'national treasure' (his words), his wife Beverley, a celebrated novelist (although not as celebrated as she would like), and their children, Nelson, Elizabeth, Achilles, various degrees of catastrophe waiting to happen.

Together they will go on a journey of discovery through the Hogarthian jungle of the modern living where past presumptions count for nothing and carefully curated reputations can be destroyed in an instant. Along the way they will learn how volatile, how outraged, how unforgiving the world can be when you step from the proscribed path.
To err is maybe to be human but to really foul things up you only need a phone.

Read and Recommended by Graeme

"We could all do with a laugh during Covid restrictions and lockdown, and this new novel is certain to make you chuckle aloud as you read. John Boyne demonstrated his flair for comedy in The Heart’s Invisible Furies but here the humour is dialled up to absurd but very entertaining new heights - and his target is social media and the new woke culture of today. George Cleverley is a British national treasure, a talk show host on the BBC, reminiscent of Parkinson. His wife Beverly is an extremely successful romance novelist who has been outsourcing the actual writing work to various ghost writers for years. Both of them are entangled in complicated extramarital affairs - Beverly is besotted with a priapic Ukrainian dancer she was partnered with on ‘Dancing with the Stars’ and has no idea that he has also had sex with almost every other character in the book, including all three of her children! Meanwhile, George finds himself at the centre of a social media maelstrom when he misgenders a trans person, and social media and George’s own inadequate response magnifies the situation into a national sensation. John Boyne had his own very gruelling experiences with social media aggression over his YA novel My Brother’s Name is Jessica, so he knows the territory all too well. And once again John Boyne proves his incredible versatility as a writer - his last five novels have all been very different and now he delivers a satirical triumph lampooning these times we find ourselves in."