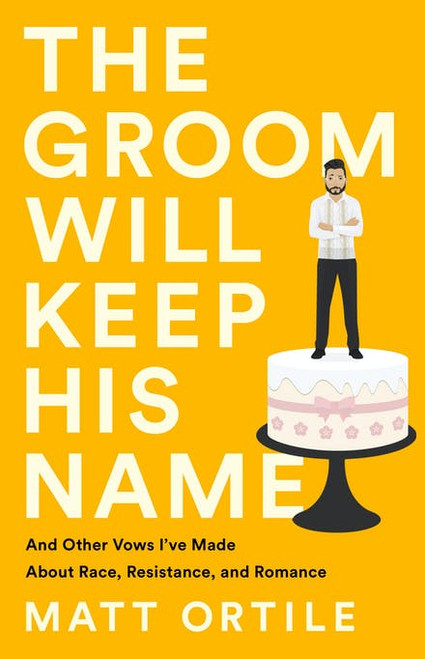 A debut collection of tender, biting essays on sex, dating, and identity from a gay Filipino immigrant learning to navigate race and resistance in America.

When Matt Ortile's family moved from Manila to Las Vegas, the locals couldn't pronounce his name. Bullied for his brown skin, accent, and femininity, he couldn't wait to move to New York, start over, and leave the past behind him - Filipino name included. In The Groom Will Keep His Name, Ortile traces his journey to an awakening of radical self-love.When we date and mate, we tell stories about ourselves, trying to put our 'best foot forward.' Dating apps and social media have encouraged us to further curate the face we show the world. Our personal myths, however true or false, reveal not just who we are, but who we want to be. The Groom Will Keep His Name explores the various fables Ortile has spun for himself: as a Vassar Girl, an American Boy, a card-carrying member of Gay Twitter, and a Filipino immigrant looking to build a home.With intelligence, wit, and his heart on his sleeve, Matt Ortile examines cruising and one-night stands, DMs and texts, relationships and whateverships that helped him interrogate his queer desire, race, complicity in white supremacy, and solidarity with other marginalized people.

"This is a daring, funny, and heartwarming memoir of a young, gay, brown immigrant moving from Manila to the U.S.. Ortille once believed that marrying a white man was his strategic means to finally ‘belong’ amongst mainstream white American society. But as he navigates the 'harsh' reality of sex and romance, he quickly discovers it is not as straightforward as he previously believed. The locals can’t even correctly pronounce his last name! Ortile recounts and transforms the bad experiences from his sex and dating life into refreshing observations about brown gay men making sense of themselves in a new and alien culture. In the first chapter, "Barong Tagalog", he responds to the many white adults praising his English fluency ‘for an immigrant’, by reminding readers that the Philippines' colonial history was entangled with U.S. imperialism and therefore also the English language. He creatively uses this knowledge to channel his gay, migrant, and brown identity into a fashion statement for his future wedding day. The next chapters follow Ortille moving to New York, and while pop culture offers some clues to navigating the big city (including the legendary Sex and The City), living alone means Matt looks to others to help shape him through dates, relationships, friendships, and of course, ‘whateverships’. In "Rice Queens, Dairy Queens", Ortille subverts rejection into a closer examination of the gay beauty standard that places a white muscular body at its epicentre, throwing him back into the men's underwear section where he was brainwashed for the first time. Frank, bold, and often riotously funny, Matt Ortille sheds new light on being a gay Asian man in the not-so-post-racial world."

"I Will Not Be Erased": Our stories about growing up as people of colour