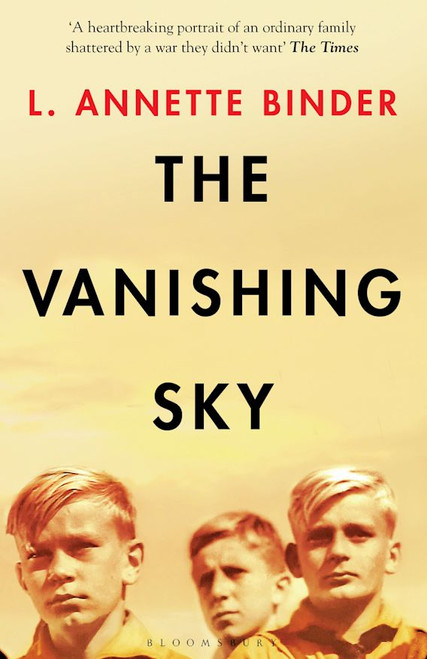 They've wrecked the world, these men, and still they're not done. They'd take the sky if they could.

Germany, 1945, and the bombs are falling. In Heidenfeld, Etta and her husband Josef roam an empty nest: their eldest son Max is fighting on the frontlines, while fifteen-year-old Georg has swapped books for guns at a Nürnberg school for the Hitler Youth. At home, news of the war provokes daily doses of fear as the planes grow closer, taking one city after the next.

When Max is unexpectedly discharged, Etta is relieved to have her eldest home and safe. But soon after he arrives, it's clear that the boy who left is not the same returned. With Georg a hundred miles away and a husband confronting his own difficult feelings toward patriotic duty, Etta alone must gather the pieces of a splintering family, determined to hold them together in the face of an uncertain future.

"Binder’s debut novel (after the collection Rise) follows Etta and Josef Huber and their sons Max and Georg in rural Germany during WWII. Before Georg, a bookish 15-year-old, is sent to a Hitler Youth academy, he secretly watches a Roma camp by the river, hoping in vain that the women’s dancing will spark the socially acceptable carnal desire for the opposite sex that he knows his strict and punitive father expects of him. (Meanwhile, Georg would rather be studying Greek and Latin than join with the fascists.) Binder then alternates between Georg’s life at the academy, where he sees the damage suffered by bombing victims and wishes he could go home like them; and Max returned from the front, tormented by headaches and emotionally shattered. After Georg kisses a boy he’d befriended, he sets out alone for home. Binder, who left Germany for the U.S. as a child, based her book partly on her father’s experiences in the Hitler Youth organization and on her paternal grandfather’s journals from between the wars, and describes the war’s toll on German soldiers and civilians while lingering on an eerie, subtle irony in descriptions of Jews, Roma, gays, and people with mental illnesses, whose dire circumstances their neighbors were blissfully unaware of. This provides a fresh take on the madness of war."

My Love Is a Beast: Confessions

In My Father's House

A Haunting at Holkham