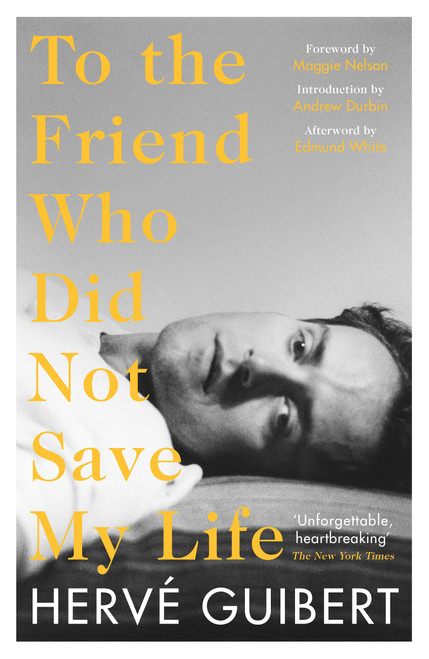 Foreword by Maggie Nelson, with contributions by Edmund White and Andrew Durbin.

A novel that describes, with devastating, darkly comic clarity, its narrator's experience of being diagnosed with AIDS.

First published by Gallimard in 1990, To the Friend Who Did Not Save My Life describes, with devastating, darkly comic clarity, its narrator's experience of being diagnosed with AIDS. Guibert chronicles three months in the penultimate year of the narrator's life as, in the wake of his friend Muzil's death, he goes from one quack doctor to another, describing the progression of the disease and recording the reactions of his many friends.

The novel scandalized the French media, which quickly identified Muzil as Guibert's close friend Michel Foucault. To the Friend became a bestseller, and Guibert a celebrity. Guibert continued to document the daily experiences of his body in a series of novels and diaries, mostly published posthumously. To the Friend has since attained a cult following for its intimate and candid tone, its fragmented and slippery form. As Edmund White observed, “[Guibert's] very taste for the grotesque, this compulsion to offend, finally affords him the necessary rhetorical panache to convey the full, exhilarating horror of his predicament.” In his struggle to piece together a language suited to his suffering, Hervé Guibert catapulted himself into notoriety and sealed his reputation for uncompromising, transgressive prose.

"Anonymity comes for us all soon enough, but it has encroached with mystifying speed upon the French writer Hervé Guibert, who died at 36 in 1991. His work has been strangely neglected in the Anglophone world, never mind its innovation and historical importance, its breathtaking indiscretion, tenderness and gore. How can an artist so original, so thrillingly indifferent to convention and the tyranny of good taste — let alone one so prescient — remain untranslated and unread?" -Parul Sehgal, New York Times Book Review

The Cambridge Companion to Queer Studies

Plague Years: A Doctor’s Journey through the AIDS Crisis