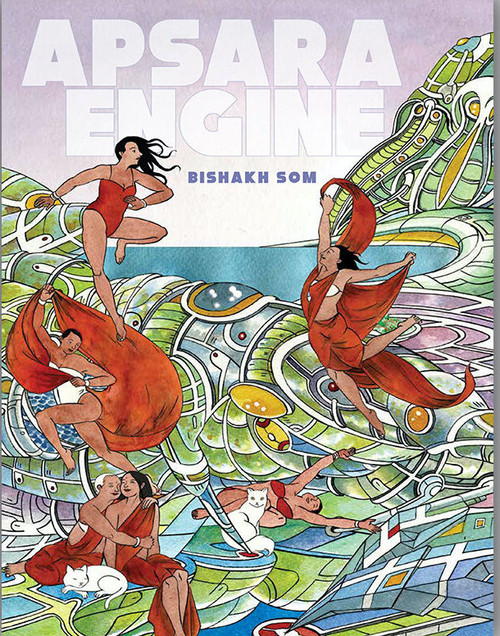 By turns fantastical & familiar, this graphic short fiction collection is immersed in questions of gender, the body, & existential conformity.

The eight delightfully eerie stories in Apsara Engine are a subtle intervention into everyday reality: a woman drowns herself in a past affair, a tourist chases another guest into an unforeseen past, and a nonbinary academic researches postcolonial cartography. Imagining diverse futures and rewriting old mythologies, these comics delve into strange architectures, fetishism, and heartbreak.

Painted in rich sepia-toned watercolours, Apsara Engine is Bishakh Som's highly anticipated debut work of fiction. Showcasing a series of fraught, darkly humorous, and seemingly alien worlds—which ring all too familiar—Som captures the weight of twenty-first-century life as we hurl ourselves forward into the unknown.

“Som’s provocative collection of short comics explores the idiosyncrasies of gender, desire, friendship, courtship, family, and culture through speculative fiction. Each of her eight stories, rendered in fine pen and exquisite watercolor, explores a different facet of life in distinct futures, with a focus on South Asian perspectives and cultures. Apsara Engine is the least narrative of the bunch, a puzzle-like mapped series of vignettes of futuristic people on the phone, in lust, and attaining nirvana. In 'Throat' a man is confronted with an acquaintance’s pet human/dog hybrid and finds it more intelligent than its owner believes, while 'I Can See It in You' finds an interracial couple in strife after an impossible guest crashes a party. The resonant 'Swandive' features two desi transgender people who meet at an academic conference, bond, and map out a glorious urban trans future in (literal) blood. Som’s delicate lines are turned to sharply expressive faces and gestures, with subtle sepia tinting the stories and luminescent, layered colors on chapter openers reminiscent of retrofuturistic stained glass. And the font is a precise cursive, as if pulled from an illuminated manuscript. Som is a master of pacing, letting the emotion of her scenes churn and roil in the reader; her debut heralds the rise of new talent to watch.” - Publishers Weekly Starred Review

An Apartment on Uranus: Chronicles of the Crossing