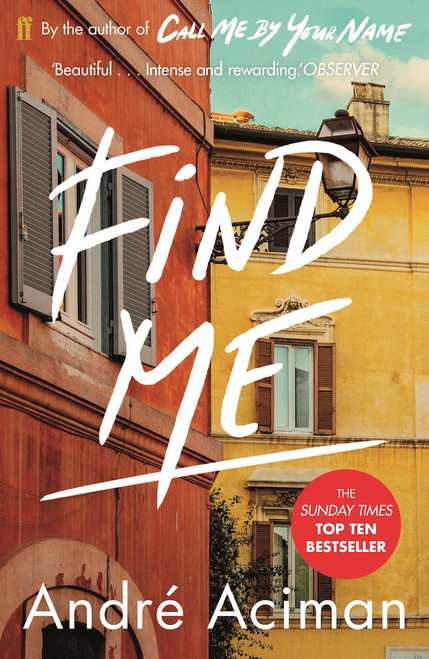 In Find Me, Aciman shows us Elio's father, Samuel, on a trip from Florence to Rome to visit Elio, now a gifted classical pianist. A chance encounter on the train upends Sami's visit and changes his life forever.

Elio soon moves to Paris, where he, too, has a consequential affair, while Oliver, a New England college professor with a family, suddenly finds himself contemplating a return trip across the Atlantic.

Aciman is a master of sensibility, of the intimate details and the nuances of emotion that are the substance of passion. Find Me brings us back inside the world of one of our greatest contemporary romances to show us that in fact true love never dies.

"The problem with writing a follow-up to a beloved novel ( Call Me by Your Name ) which has been adapted into an even more acclaimed film, is that expectations are so high it is almost impossible to meet them. André Aciman has tried to dampen down these expectations by rejecting the term ‘sequel’ and describing his new novel Find Me as ‘inspired’ by Call Me by your Name. And it would be wise to take note when approaching this book, as it not what avid fans of the Elio-Oliver romance have been hungering for. The first half of the novel focuses instead on Elio’s father, Sami. Now divorced from Elio’s mother, he is travelling to Rome to meet with Elio, when a striking young woman sits opposite him on the train. Miranda is going to Rome to spend time with her father who is dying. Although Sami is twice her age, there is an instant spark of attraction and a dynamic rapport. It is more than 100 pages before Elio enters the narrative, meeting his father and Miranda and witnessing the blush of this new love. Shortly afterwards, we skip numerous years, enter a new section of the novel now focused solely on Elio, living in Paris and embarking on a new romance with Michel, a wealthy lawyer twice his age. Is this finally the new love who will help Elio overcome the ghost of his passion with Oliver? Some pace is added to the narrative by the puzzle of a decades-old mystery involving a musical score treasured by Michel’s father for some mysterious reason. And Elio as a professional musician is the ideal candidate to help delve into it. In the novel’s third section and the novel’s final 50 pages, Oliver’s perspective is introduced. He is an established academic hosting a farewell party to New York where he has been living temporarily with his wife and sons. Yet he is restless in his marriage, still haunted to some degree by his rejection of Elio, and has invited two people to the party that he’s attracted to - a male colleague and a woman from his yoga class. Readers of Aciman will recognise many familiar themes and preoccupations in Find Me - intergenerational relationships, sexual fluidity and narrative time jumps - and the book is very reminiscent of his more recent novel Enigma Variations. Find Me is less concerned with Elio and Oliver, then it is about exploring the relationships between fathers and their children such as Elio, Miranda and Michel. Though the main thematic preoccupation explores the idea of taking a chance on love when an opportunity arises - do you seize it (as Sami does) or do you retreat, immediately (Michel) or later (Oliver)? And what are the consequences of these decisions? Savour this question instead and the beauty of Aciman’s elegiac prose, and the pleasures of this novel will slowly unfold."

Eat My Heart Out