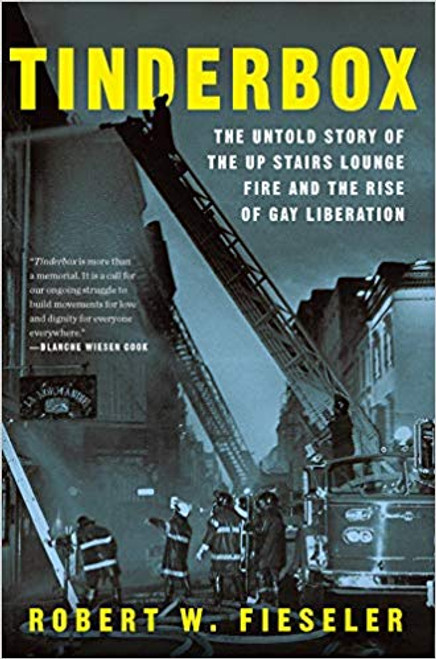 Buried for decades, the Up Stairs Lounge tragedy has only recently emerged as a catalyzing event of the gay liberation movement. In revelatory detail, Robert W. Fieseler chronicles the tragic event that claimed the lives of thirty-one men and one woman on June 24, 1973, at a New Orleans bar, the largest mass murder of gays until 2016. Relying on unprecedented access to survivors and archives, Fieseler creates an indelible portrait of a closeted, blue- collar gay world that flourished before an arsonist ignited an inferno that destroyed an entire community. The aftermath was no less traumatic―families ashamed to claim loved ones, the Catholic Church refusing proper burial rights, the city impervious to the survivors’ needs―revealing a world of toxic prejudice that thrived well past Stonewall. Yet the impassioned activism that followed proved essential to the emergence of a fledgling gay movement. Tinderbox restores honor to a forgotten generation of civil-rights martyrs. 16 pages of illustrations.

Praise for the book:

“Fieseler handles contradictions with finesse, parsing the closet’s long shadow over gay life in New Orleans, one reason the [Up Stairs Lounge] tragedy did not catalyze the kind of outrage and activism that followed the Stonewall rebellion.... The book is loving, sensitive, and diligent.”
- Parul Sehgal, New York Times

“This vital book chronicles one of the worst outrages against gay people in modern America, and it does so with fantastic vividness. It restores a forgotten chapter of horror to our national narrative of rights. Robert W. Fieseler reminds us how deep prejudice was, not only on the part of the man who set the fire at the Up Stairs Lounge, but also in the media that ignored the story and the population that took no interest in it.”
- Andrew Solomon, author of The Noonday Demon

Fighting Proud : The Untold Story of the Gay Men Who Served in Two World Wars (Paperback)

Tim Cook : The Genius Leading Apple into a New era of Success

They Called Us Enemy (graphic memoir)

True Confessions of a Shameless Gossip

The Unpunished Vice : A Life Of Reading (Paperback)