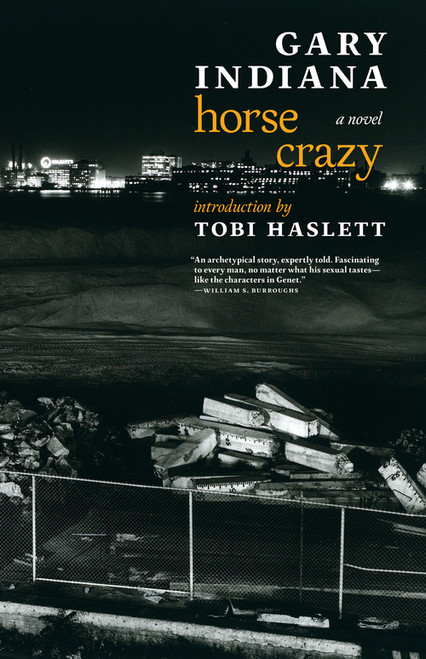 "This story, if it is one, deserves the closure of a suicide, perhaps even the magisterial finality of what is usually called a novel, but the remnants of that faraway time offer nothing more than a taste of damp ashes, a feeling of indeterminacy, and the obdurate inconclusiveness of passing time."

So writes the unnamed narrator of Horse Crazy, looking back on a season of madness and desire. The first novel from the brilliant, protean Gary Indiana, Horse Crazy tells the story of a thirty-five-year-old writer for a New York arts and culture magazine whose life melts into a fever dream when he falls in love with the handsome, charming, possibly heroin-addicted, and almost certainly insane Gregory Burgess. In the derelict brownstones of the Lower East Side in the late eighties, among the coked out restauranteurs and art world impresarios of the supposed "downtown scene," the narrator wanders through the fog of passion. Meanwhile, the AIDS epidemic is spreading through the city, and New York friendships sputter to an end. Here is a novel where the only moral is that thwarted passion is the truest passion, where love is a hallucination and the gravest illness is desire.

An actor, playwright, artist, poet, critic, and novelist who has chronicled the despair and hysteria of America in the late twentieth century, Gary Indiana was born in 1950 in New Hampshire. From Horse Crazy (1989), a tale of feverish love set against the backdrop of downtown New York amid the AIDS epidemic, to Do Everything in the Dark (2003), "a desolate frieze of New York's aging bohemians" (n+1), Indiana's novels mix horror and bathos, grim social commentary with passages of tenderest, frailest desire. With 1997's Resentment: A Comedy, Indiana began his true crime trilogy, following up with Three Month Fever: The Andrew Cunanan Story (1999) and Depraved Indifference (2002). Together, the three novels show the most vicious crimes in our nation's history to be only American pathologies personified. In 2015, Indiana published his acclaimed anti-memoir, I Can Give You Anything But Love. Called one of "the most brilliant critics writing in America today" by the London Review of Books, "the punk poet and pillar of lower-Manhattan society" by Jamaica Kincaid, and "one of the most important chroniclers of the modern psyche" by the Guardian, Gary Indiana remains both inimitable and impossible to pin down.