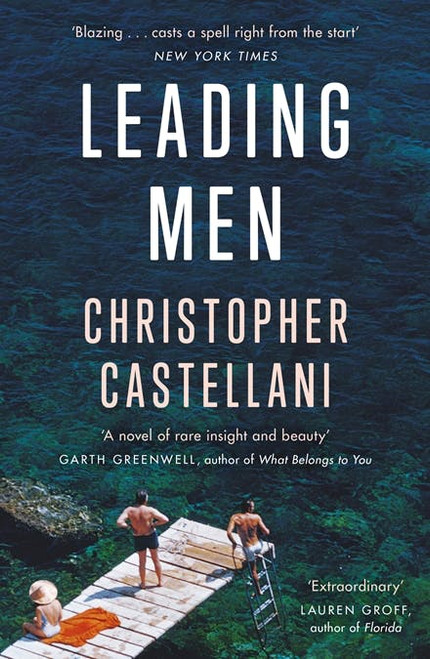 A dazzling and devastating reimagining of Tennessee Williams's love affair with his longtime companion Frank Merlo.

Their encounter will alter the course of their lives forever.

Spanning half a century and featuring a dazzling cast of characters - from Anna Magnani cooking pasta amatriciana in a sun-kissed kitchen in Rome, to Ludovico Visconti barking orders on his latest film set - LEADING MEN is a heart-breaking novel about life in the shadows of greatness, and a moving re-telling of one of the great literary love stories of the twentieth-century.

"This alternative history novel is based around Tennessee Williams and his long-term partner Frank Merlo, although it is Frank who is the central character. Other real-life people are also prominent in the novel such as Truman Capote, Paul Bowles, Anna Magnani and more crucially the now obscure writer John Horne Burns and his lover Sandro Nencini. The other major character, actress and muse Anja Bloom, is an invention of the author’s. Frank Merlo was a working-class Italian from New Jersey who met Tennessee soon after his triumph with “A Streetcar Named Desire”. Interestingly, Tennessee wrote most of his major works during his ‘Frankie years’ and then after Frank’s death, sank into a depression and failed to write another great play. Although this novel imagines that he wrote a short, final play which he entrusted to Anja Bloom. An arthouse film sensation, she has become an iconic reclusive figure in the mould of Greta Garbo. Yet the son of Sandro manages to befriend her, learns about the play and tries to persuade her to have it produced. The play was a tribute of sorts to Frank, who Tennessee had abandoned and failed to visit when he was dying of lung cancer. This Anja narrative strand about the lost play does come to a surprising and very satisfying climax. But it is utterly eclipsed by the 1950s sections of the novel which are so magnificently atmospheric and captivating."

Take Nothing With You (B format)