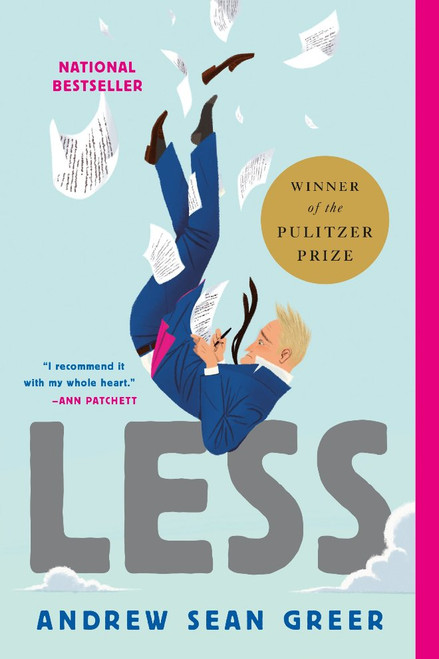 Who says you can't run away from your problems? You are a failed novelist about to turn fifty. A wedding invitation arrives in the mail: your boyfriend of the past nine years is engaged to someone else. You can't say yes - it would be too awkward - and you can't say no - it would look like defeat. On your desk are a series of invitations to half-baked literary events around the world.

QUESTION: How do you arrange to skip town?

ANSWER: You accept them all.

What would possibly go wrong? Arthur Less will almost fall in love in Paris, almost fall to his death in Berlin, barely escape to a Moroccan ski chalet from a Saharan sandstorm, accidentally book himself as the (only) writer-in-residence at a Christian Retreat Center in Southern India, and encounter, on a desert island in the Arabian Sea, the last person on Earth he wants to face. Somewhere in there: he will turn fifty. Through it all, there is his first love. And there is his last.

Because, despite all these mishaps, missteps, misunderstandings and mistakes, ''Less'' is, above all, a love story.

A scintillating satire of the American abroad, a rumination on time and the human heart, a bittersweet romance of chances lost, by an author The New York Times has hailed as "inspired, lyrical," "elegiac," "ingenious," as well as "too sappy by half," ''Less'' shows a writer at the peak of his talents raising the curtain on our shared human comedy.

WINNER of the 2018 Pulitzer Prize for Fiction, and described by the Pulitzer judges as ‘a generous book, musical in its prose and expansive in its structure and range, about growing older and the essential nature of love’.

"Andrew Sean Greer is the author of five previous novels, yet he has hit the literary jackpot with this novel, his sixth, by winning the 2018 Pulitzer Prize for Fiction. It’s somewhat surprising as his previous novels have all been inventive literary works, while Less is his first comic novel - and the Pulitzer is usually reserved for ‘serious books’. Things are not going well for the novel’s main character Arthur Less. He’s about to turn 50-years-old, a most unwelcome milestone given gay men’s propensity for clinging gamely to youth. He is more famous for being the boyfriend of Robert Brownburn, a great literary lion, than for his own literary endeavours. In fact, his publisher has turned down his latest novel, dismissing it as ‘too wistful’. And then the final indignity is that Freddy, his younger boyfriend of the past nine years has dumped him and announced his marriage to someone else. To avoid the wedding entirely by being out of the country, Arthur accepts all the dubious literary invitations that have been extended to him, and embarks on an itinerary that will take him to New York, Mexico, Italy, Germany, Morocco, India, and Japan. The American abroad is a perennially popular subject in fiction (from Henry James and Paul Bowles through to Garth Greenwell) but this must be one of the wittiest excursions ever. In Mexico City, the literary festival director has dreamt up a wish list of authors - Hemingway, Faulkner, Woolf - but as they are all dead, he has to content himself with Arthur Less, on a panel with Robert Brownburn’s ex-wife Marian. Yes, Arthur is to appear with the woman whose husband he stole decades ago in front of a large, avid audience! At a party in Paris he is accosted by a drunk gay writer who accuses him of being ‘a bad gay’ as his books are ‘incredibly self-hating’! In India his signature blue suit (‘somewhere between ultramarine and cyanide salts’) comes to an untimely end, and when he turns up in Italy to an obscure literary prize ceremony, he discovers it is to be judged by a group of surly teenagers! But all of these amusing antics and literary jokes are also wrapped up in very beautiful prose, and when the ending comes, it is a wonderful surprise to realise that the narrator is someone known to us. This award success is richly deserved, not only for this very fine novel but also for Greer’s body of work. Hopefully it will encourage readers to seek out his other novels - The Impossible Lives of Greta Wells and The Story of a Marriage - which both have major gay storylines and are superb."

"I could not love LESS more." - Ron Charles, Washington Post

"Less is the funniest, smartest and most humane novel I've read in a long time. Greer writes sentences of arresting lyricism and beauty. His metaphors come at you like fireflies... It's no less than bedazzling, bewitching and be-wonderful." ―New York Times Book Review

"Greer is an exceptionally lovely writer, capable of mingling humor with sharp poignancy.... Brilliantly funny.... Greer's narration, so elegantly laced with wit, cradles the story of a man who loses everything: his lover, his suitcase, his beard, his dignity."―Ron Charles, Washington Post

"Greer's novel is philosophical, poignant, funny and wise, filled with unexpected turns.... Although Greer is gifted and subtle in comic moments, he's just as adept at ruminating on the deeper stuff. His protagonist grapples with aging, loneliness, creativity, grief, self-pity and more."―San Francisco Chronicle