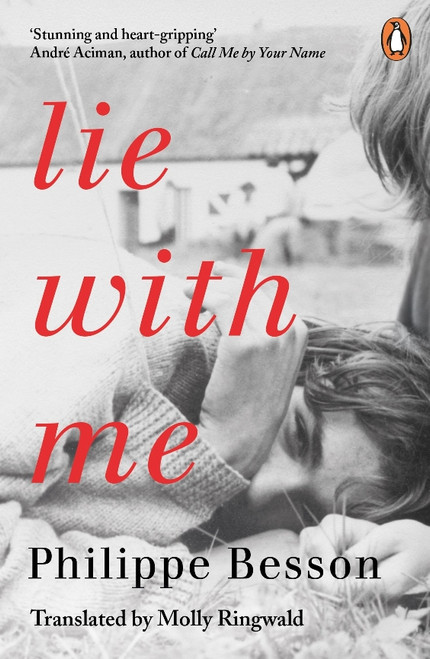 “Stunning and heart-gripping.” —André Aciman, author of Call Me By Your Name

Just outside a hotel in Bordeaux, Philippe chances upon a young man who bears a striking resemblance to his first love. What follows is a look back at the relationship he’s never forgotten, a hidden affair with a gorgeous boy named Thomas during their last year of high school. Without ever acknowledging they know each other in the halls, they steal time to meet in secret, carrying on a passionate, world-altering affair.

Dazzlingly rendered in English by Ringwald in her first-ever translation, Besson’s powerfully moving coming-of-age story captures the eroticism and tenderness of first love—and the heartbreaking passage of time.

Praise for Lie with Me:

"An elegiac tale of first, hidden love between two teen-age boys who have no chance of a shared future, Lie With Me sold more than a hundred thousand copies in France, where it won several prizes and is being made into a movie. Elle deemed it “the French Brokeback Mountain" ... The book reads like a photograph, faded but composed: the bac, linden trees, a green Simca 1100, Lino Ventura. We can see even if we don’t know. Call it a memoir of a memory."
—Lauren Collins, The New Yorker

"This Year’s Call Me by Your Name Is French: More Meta But Just As Hot ... Lie With Me is the story of a successful (unnamed) French novelist ... who catches a glimpse of what he thinks is a past lover in a hotel. Triggered by the sighting, he traces the story of his secret high-school affair with that lover: It was brief in tenure but formed the mold into which he has since tried to press every other romantic relationship."
—Hillary Kelly, Vulture

“One of the best novels you'll read this year was actually published in France in 2017. Translated by the actress and author Molly Ringwald, Lie With Me by Philippe Besson brilliantly reminds readers of the joys and agonies of love.”
—Jeffrey Masters, The Advocate

"A devastating read about first love ... The novel is so irresistible, it can’t be put down ... Lie With Me is the must-read gay novel of the summer."
—Gary Kramer, Philadelphia Gay News

“Lie with Me will enthrall the reader from start to finish. The prose is so spot on. Besson seems incapable of wasting a word. His descriptions, his feelings, and his memories are precise and captivating.”
—Declan Henry, New York Journal of Books

And If I Fall