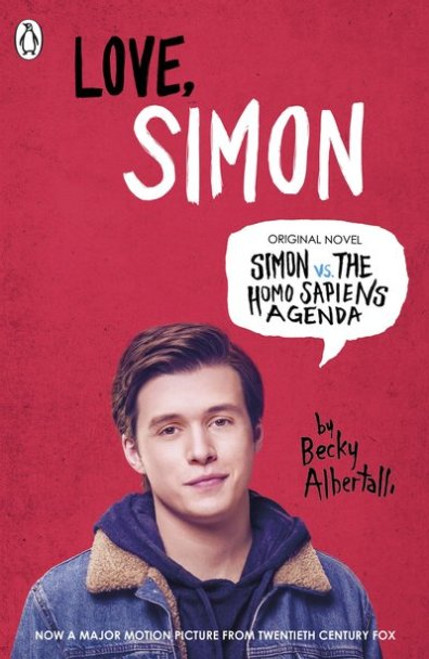 “Debut novelist Albertalli writes believably in the voice of a confused, openhearted 16-year-old. Readers will fall madly in love with Simon.” - Publishers Weekly

Sixteen-year-old and not-so-openly gay Simon Spier prefers to save his drama for the school musical. But when an email falls into the wrong hands, his secret is at risk of being thrust into the spotlight. Now change-averse Simon has to find a way to step out of his comfort zone before he's pushed out—without alienating his friends, compromising himself, or fumbling a shot at happiness with the most confusing, adorable guy he's never met.

Incredibly funny and poignant, this twenty-first-century coming-of-age, coming out story—wrapped in a geek romance—is a knockout of a debut novel by Becky Albertalli.

William C. Morris Award Winner: Best Young Adult Debut of the Year, and soon to be released as a major motion picture...

Reviewed and Recommended by Graeme Aitken:

"This award-winning YA novel is now a major Hollywood feature film but it’s easy to see why this book attracted their interest in the first place. It’s a classic mystery that slowly turns into a secret admirer enigma - someone likes me, but I don’t know who it is! Simon discovers that there is another gay teen at his school and the two boys communicate by email, slowly opening up to each other. And as they do, gradually something more intimate begins to grow between them. But their anonymous situation is complicated by the fact that both boys are in the closet, and that Simon is being blackmailed by a classmate who has inadvertently stumbled upon his secret. The narrative’s suspense is not only restricted to the identity of who Simon’s admirer (Blue) is, but also whether Simon will come out to friends and family and whether Blue will do the same. It’s a clever inventive plot and narrative, and the supporting cast of characters (Simon’s friends and family) are exceptionally well-developed and observed. But the blackmail is also an ingenious device that complicates the situation and raises the stakes for Simon and Blue."

Pray the Gay Away

What Is Gender? How does It Define Us? And Other Big Questions