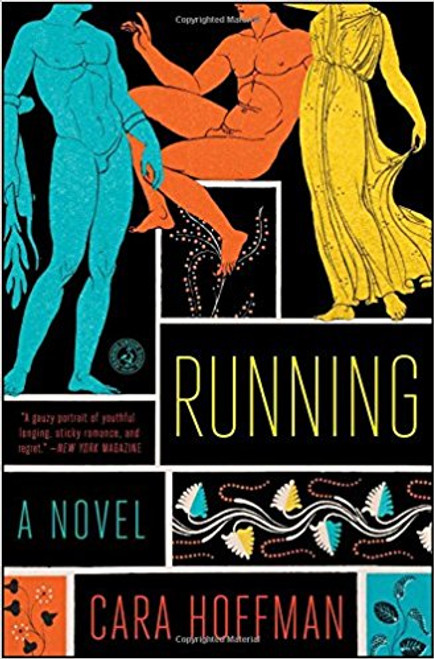 From the critically acclaimed author of Be Safe I Love You comes a haunting novel of love, friendship, and survival set in the red light district of Athens in the 1980s that New Yorkmagazine calls “a gauzy portrait of youthful longing, sticky romance, and regret.”

Running follows the lives of three friends and lovers: queer English poet Milo Rollack, prep school dropout Jasper Lethe, and seventeen-year-old Bridey Sullivan, an American with a fascination for fire. Barely out of childhood, squatting in a crumbling hotel on the outskirts of Athens in the late 1980s, the three slip in and out of homelessness, heavy drinking, and underground jobs. While working as runners for the hotel—convincing tourists to stay there for a commission and free board—they are befriended by an IRA fugitive and become inextricably linked to an act of terrorism that will mark each of them for life.

Bridey, the consummate survivor, abandons Jasper and Milo, planning to return when the dust has settled. But no one has fared well in her absence. And then a mysterious death drives her to seek an impossible absolution that will take her from the streets of the red-light district to the remote island cliff houses of the southern Mediterranean.

Twenty-five years later, Milo, now a successful writer and professor in Manhattan, struggles to live ethically in a world he knows is corrupt, coping with a secret that makes him a stranger to those closest to him.

“Beautiful and atmospheric…original and deeply sad” (Kirkus Reviews), Running is a sweeping and fearless story of friendship and survival from Cara Hoffman, an author who “writes like a dream—a disturbing, emotionally charged dream” (The Wall Street Journal).

"Explores the lingering echoes of our young, passionate friendships through time." —Newsweek

"Hoffman is fearless and trusting of her readers, and her precise prose captures the novel's many settings—Greece, Washington State, New York City—and her characters' feelings and actions, vividly." —Booklist (starred review)

“This uncompromising, incendiary novel holds true to the same fierce commitments as its haunting, haunted characters: it follows risk beyond all rules, and makes a kind of meaning I haven’t seen before. Caught between acts of radical violence and radical love, Hoffman’s poets and conmen are lost souls with no interest in being found, a queer family bound by affinity and nerve. I fell in love with them, and with this ferocious, brilliant book.” —Garth Greenwell, author of What Belongs to You

"Strange and shocking and sad—Hoffman’s language is so deft and precise. I love the empathy with which she writes about the lives of outsiders, depicting the tenderness and fragility of their friendships so beautifully. Running is wonderful." —Paula Hawkins, author of The Girl on the Train

"Running is an unstoppable spark racing along a fuse. There is no escaping the heat, grime, or glittering promise of violence of Athens’s underbelly, but the bond between three young drifters is infused with moments of transcendence. I devoured this beautiful book, and Hoffman’s writing is a revelation." —Rae Meadows, author of I Will Send Rain

"Reading this novel was a conversion experience. I was immediately with the narrator, and I didn't care where we were going. Every sentence lit up with silver rain and smoke and the beauty of arriving in a foreign city and the defiance of needing almost nothing—and how strangely impossible it is when you lose that. Running is like taking a trip into a story you never knew you needed. You should take it, at once." —Alexander Chee, author of The Queen of the Night