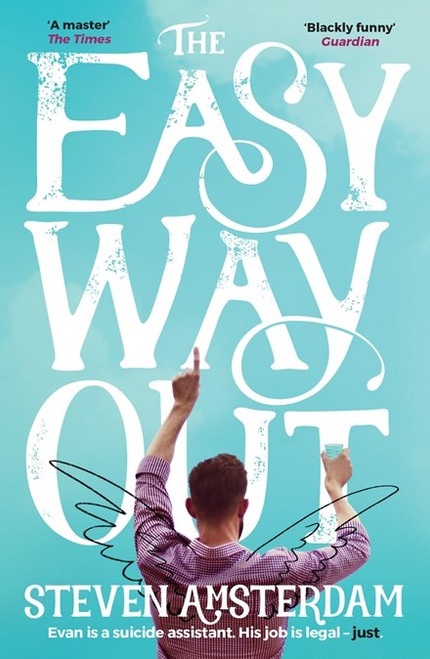 If you could help someone in pain, would you?

Evan is a nurse, a suicide assistant. His job is legal... just. He's the one at the hospital who hands out the last drink to those who ask for it.
Evan's friends don't know what he does during the day. His mother, Viv, doesn't know what he's up to at night. And his supervisor suspects there may be trouble ahead.

As he helps one patient after another die, Evan pushes against legality, his own morality and the best intentions of those closest to him, discovering that his own path will be neither quick nor painless.

He knows what he has to do.

New York-born author Steven Amsterdam was longlisted for the 2017 Miles Franklin Award for this book, and won The Age Book of the Year award for his first book. He lives in Melbourne, Australia, where he also works as a palliative care nurse.

Praise for this book:

'' 'The Easy Way' Out is a perfect storm of a novel. Superbly written and instantly engaging, with great characters and a killer (excuse the pun) premise...
The assisted-death scenes are deeply intimate, and full of loving grace. And the questions raised by the moral dilemmas faced by Evan are vast, yet brutally simple, questions the author admits to having fielded in real-world scenarios''  - Chris Flynn, Sydney Morning Herald

''For a novel about death – assisted dying, more specifically – 'The Easy Way Out' is incredibly funny. Steven Amsterdam has a wry sense of humour, which is always at work throughout the book, and his sardonic narrator, Evan, is perfectly pitched to offset the darkness of, and the discomfort around, the novel's subject matter.''
- Fiona Wright, Australian Book Review