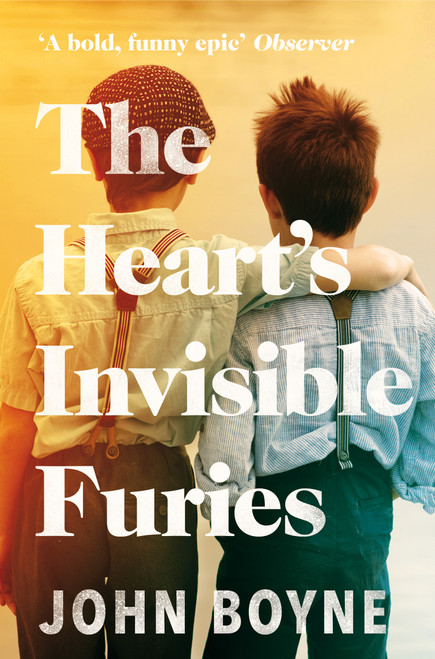 Cyril Avery is not a real Avery or at least that’s what his adoptive parents tell him. And he never will be. But if he isn’t a real Avery, then who is he?

Born out of wedlock to a teenage girl cast out from her rural Irish community and adopted by a well-to-do if eccentric Dublin couple via the intervention of a hunchbacked Redemptorist nun, Cyril is adrift in the world, anchored only tenuously by his heartfelt friendship with the infinitely more glamourous and dangerous Julian Woodbead.

At the mercy of fortune and coincidence, he will spend a lifetime coming to know himself and where he came from – and over his three score years and ten, will struggle to discover an identity, a home, a country and much more.

In this, Boyne's most transcendent work to date, we are shown the story of Ireland from the 1940s to today through the eyes of one ordinary man. The Heart's Invisible Furies is a novel to make you laugh and cry while reminding us all of the redemptive power of the human spirit.

READ AND RECOMMENDED BY GRAEME

"The Irish writer John Boyne is probably best known for novels that are grim - The Boy in the Striped Pyjamas is set against a Nazi Holocaust camp while The Absolutist explores a WWI conscientious objector. And the title of this novel might make you imagine you are in for more of the same and over almost 600 pages - except that you aren’t! For while this novel does have its share of grim and dramatic moments, the overall tone is so much lighter. The book is fast-paced, very engrossing, and often very funny. It covers the lifetime of a gay Irish man, Cyril Avery, from his birth to his impending death and does so in seven year cycles. So the narrative is constantly jumping forward seven years and the reader has to catch-up. It’s a technique that heightens the pace and the only downside is that characters you had become attached to often get left behind ... except they might crop up again later on. The narrative also hinges numerous times on coincidences or happenstance, but the buoyant flow of the storyline is so engrossing they never really jar. There is merely an abundance of those serendipitous moments that can and do occur in life. The characterisation and the dialogue are the book’s great strengths. Cyril himself is often very funny but there are also many vivid portraits, such as his adoptive mother Maud, a novelist, who is horrified by the concept of commercial success for her work. Or Mary-Margaret Muffet, a pious conservative young woman who insists on attaching herself to the closeted Cyril as his girlfriend. Any Irish readers are likely to especially embrace this novel as it is also a very incisive history and portrait of their country. But it is a book that deserves to be embraced by everyone, gay and straight, Irish or international, as it truly is a pleasure to read and also very entertaining."

“The Heart’s Invisible Furies is a deeply engaging and accomplished work. Screamingly funny one minute and heartbreaking the next.”

“I ran through the whole range of human emotions while reading this brilliant novel. It's a masterpiece.”

Cathy Rentzenbrink, author of The Last Act of Love

“By turns savvy, witty and achingly sad, Boyne’s latest novel is an epic romp through recent Irish history. This is a novelist at the top of his game.”

The Mail on Sunday

“Boyne creates lightness out of doom, humour out of desperately sad situations, creating a compelling page-turner… a terrific read.”

“The Heart’s Invisible Furies, by John Boyne, is like an Irish World According to Garp, by which I mean tender, dark, hilarious, heartbreaking—I loved it”

“An epic novel…. Worthy of the great master of the Irish comic novel, Flann O’Brien. The Heart’s Invisible Furies proves that John is not just one of Ireland’s best living novelists but also one of the best novelists of Ireland.”

“Written with verve, humour and heart…at its core, The Heart’s Invisible Furies aspires to be not just the tale of Cyril Avery, a man buffeted by coincidence and circumstance, but the story of Ireland itself”

“Compulsively readable…hard to put down”

“John Boyne is best known for his children’s novel The Boy in the Striped Pyjamas. His new novel shows he can write movingly for adults as well… the cast is enormous yet at no point do we lose interest in Cyril.”