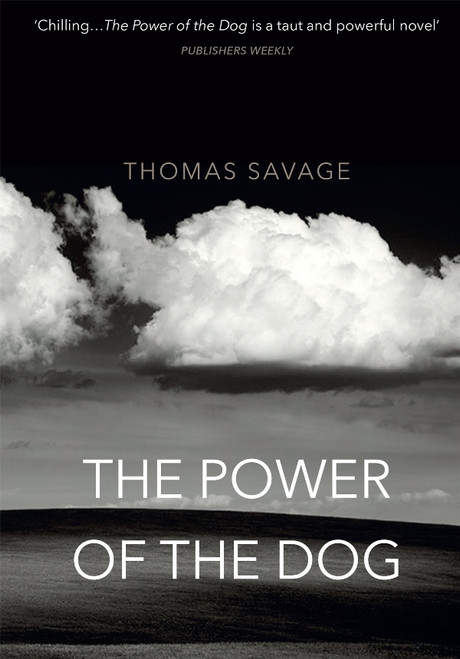 A film adaptation by Jane Campion is to premiere in 2021 starring Benedict Cumberbatch, Kirsten Dunst, Jesse Plemons and Kodi Smit-McPhee.

Phil and George are brothers, more than partners, joint owners of the biggest ranch in their Montana valley.

Phil is the bright one, George the plodder. Phil is tall and angular; George is stocky and silent. Phil is a brilliant chess player, a voracious reader, an eloquent storyteller; George learns slowly, and devotes himself to the business.

Phil is a vicious sadist, with a seething contempt for weakness to match his thirst for dominance; George has a gentle, loving soul. They sleep in the room they shared as boys, and so it has been for forty years.

When George unexpectedly marries a young widow and brings her to live at the ranch, Phil begins a relentless campaign to destroy his brother's new wife. But he does not reckon on an unlikely protector...

Phil is the emotional heart of the book (and possibly the dog of the title), a fascinating study in western machismo and a character both emotionally and sexually damaged. Thomas Savage is breathtakingly insightful in his portrayal of this man, getting beneath the skin of the character, exposing the ugliness beneath his roughly handsome exterior and the merciless cruelty that may be masking a fiercely denied homosexuality.

From its visceral first paragraph to its devastating twist of an ending, ''The Power of the Dog'' will hold you in its grip. This long lost classic has now been re-issued with an Afterword by Annie Proulx, where she describes it as "... a work of literary art''.

'this is a rich and challenging psychodrama, based on brilliant characterisation, with echoes of ''East of Eden'' and ''Brokeback Mountain'' - The Guardian

The Return of Jack Slater

The Couple Next Door