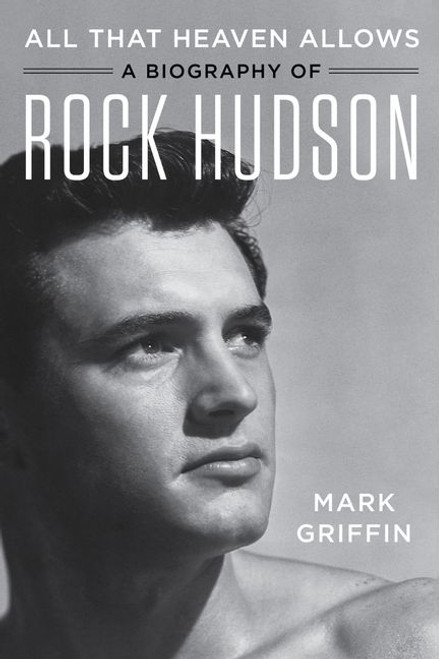 SOON TO BE A MAJOR MOTION PICTURE

The definitive biography of the deeply complex and widely misunderstood matinee idol of Hollywood's Golden Age.

Devastatingly handsome, broad-shouldered and clean-cut, Rock Hudson was the ultimate movie star. The embodiment of romantic masculinity in American film throughout the ‘50s and ‘60s, Hudson reigned supreme as the king of Hollywood.

As an Oscar-nominated leading man, Hudson won acclaim for his performances in glossy melodramas (Magnificent Obsession), western epics (Giant) and blockbuster bedroom farces (Pillow Talk). In the ‘70s and ‘80s, Hudson successfully transitioned to television; his long-running series McMillan & Wife and a recurring role on Dynasty introduced him to a whole new generation of fans.

The icon worshipped by moviegoers and beloved by his colleagues appeared to have it all. Yet beneath the suave and commanding star persona, there was an insecure, deeply conflicted, and all too vulnerable human being. Growing up poor in Winnetka, Illinois, Hudson was abandoned by his biological father, abused by an alcoholic stepfather, and controlled by his domineering mother.

Despite seemingly insurmountable obstacles, Hudson was determined to become an actor at all costs. After signing with the powerful but predatory agent Henry Willson, the young hopeful was transformed from a clumsy, tongue-tied truck driver into Universal Studio's resident Adonis. In a more conservative era, Hudson's wholesome, straight arrow screen image was at odds with his closeted homosexuality.

As a result of his gay relationships and clandestine affairs, Hudson was continually threatened with public exposure, not only by scandal sheets like Confidential but by a number of his own partners. For years, Hudson dodged questions concerning his private life, but in 1985 the public learned that the actor was battling AIDS. The disclosure that such a revered public figure had contracted the illness focused worldwide attention on the epidemic.

Drawing on more than 100 interviews with co-stars, family members and former companions, All That Heaven Allows finally delivers a complete and nuanced portrait of one of the most fascinating stars in cinema history.

Author Mark Griffin provides new details concerning Hudson's troubled relationships with wife Phyllis Gates and boyfriend Marc Christian. And here, for the first time, is an in-depth exploration of Hudson's classic films, including Written on the Wind, A Farewell to Arms, and the cult favorite Seconds. With unprecedented access to private journals, personal correspondence, and production files, Griffin pays homage to the idol whose life and death had a lasting impact on American culture.

"This comprehensive new biography of Hollywood star Rock Hudson is especially exhaustive on all of Rock’s film, television and theatre work - naturally his numerous triumphs and successes (Giant, Pillow Talk, Magnificent Obsession) are recounted in detail, but almost as much attention is paid to his numerous flops and minor films. Plenty of attention is also paid to the closeted star’s romantic and sexual life - his numerous boyfriends, affairs, female companions, and his wife Phyliss Gates. What seems beyond question about his marriage is that it was engineered by Henry Willson, the notoriously lecherous Hollywood agent who groomed Rock for stardom and for whom Phyliss worked as a secretary. Years later, after Rock’s death from AIDS complications, Phyliss would declare herself to be an unwitting victim in this arranged marriage and wrote an overblown memoir to that effect. Rock’s inner circle contradicted her claims and Griffin has numerous sources who insist that she had her own same-sex liaisons. The book also details many of Rock’s affairs and crushes, though one that stands out is his interest and championing of Harvey Lee Yeary, who would later find fame as television star and Six Million Dollar Man Lee Majors. Lee, his first wife and young son were Rock’s houseguests for a period and Rock bankrolled Lee’s appointments with acting coaches and other expenses. One acidic Hollywood columnist noted that as Rock Hudson later fought for his life in hospital, the protege he had launched to fame and fortune was nowhere to be seen! But what does shine through in many of the interviews Griffin conducted for the book is that despite his fame and success, Rock Hudson retained his mid-Western charm and was universally renowned as a nice guy who was extremely generous and supportive. Scores and scores of incidents are narrated in the book to reinforce that. Late in the biography Rock’s friend, out gay actor Michael Kearns observes that Rock’s ‘most brilliant performance was playing “Rock Hudson” all his life...the acting he did offscreen required more work, more transformation’. Film rights to this biography have been sold to Universal Pictures with Greg Berlanti (Love, Simon) on board to direct."

Fighting For Our Lives: The history of a community response to AIDS - signed by the author