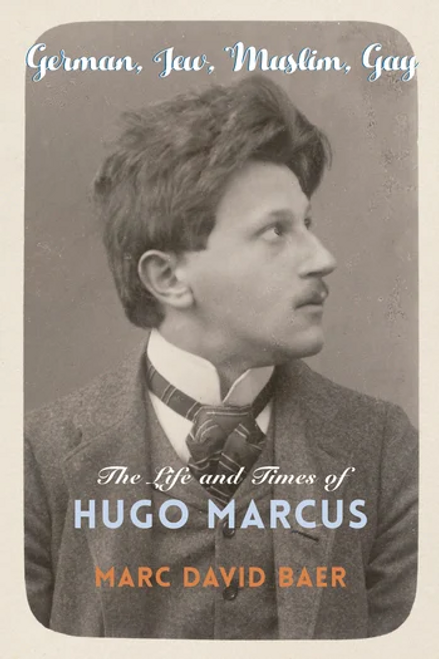 Hugo Marcus (1880–1966) was a man of many names and many identities. Born a German Jew, he converted to Islam and took the name Hamid, becoming one of the most prominent Muslims in Germany prior to World War II. He was renamed Israel by the Nazis and sent to the Sachsenhausen concentration camp before escaping to Switzerland. He was a gay man who never called himself gay but fought for homosexual rights and wrote queer fiction under the pen name Hans Alienus during his decades of exile.

In German, Jew, Muslim, Gay, Marc David Baer uses Marcus’s life and work to shed new light on a striking range of subjects, including German Jewish history and anti-Semitism, Islam in Europe, Muslim-Jewish relations, and the history of the gay rights struggle. Baer explores how Marcus created a unique synthesis of German, gay, and Muslim identity that positioned Johann Wolfgang von Goethe as an intellectual and spiritual model. Marcus’s life offers a new perspective on sexuality and on competing conceptions of gay identity in the multilayered world of interwar and postwar Europe. His unconventional story reveals new aspects of the interconnected histories of Jewish and Muslim individuals and communities, including Muslim responses to Nazism and Muslim experiences of the Holocaust. An intellectual biography of an exceptional yet little-known figure, German, Jew, Muslim, Gay illuminates the complexities of twentieth-century Europe’s religious, sexual, and cultural politics.

"This extraordinary biography of Hugo Marcus reads like an amazing detective novel of twentieth-century history. Baer recreates the life and times of a gay Jewish intellectual in Germany who converts to Islam and whose life is saved from the Nazis by the Muslim community of Berlin. The story is a thrilling page turner that upends our assumptions about Jewishness, homosexuality, Muslim-Jewish relations, orientalism, and the challenges of modernity."-Susannah Heschel, Eli Black Professor of Jewish Studies, Dartmouth College

"That identity is fluid is no surprise in the twenty-first century: that such fluid identities collided with changing realities in the rapid transition from Imperial to Republican to Nazi Germany in the early twentieth century may also not surprise the reader. Yet the story of Hugo Marcus seems unique: we have other accounts of gay Jews fighting their double stigmatization as well as the lives of German Jews attracted to or indeed converting to Islam during this period. Yet in the tale of Hugo Marcus, elegantly told by Marc David Baer, we have a biography that links complex questions of identity to institutional histories and their dislocation in the German-speaking world. Ending with his ashes strewn on a paupers' grave in Bern, Marcus’s tale is moving, exemplary in its uniqueness for the transitions of German Jewish intellectuals and perhaps indicative of paths yet to be followed by other marginalized individuals in our ever darkening age of rising antisemitism, Islamophobia, and homophobia."-Sander Gilman, coauthor of Are Racists Crazy? How Prejudice, Racism, and Antisemitism Became Markers of Insanity