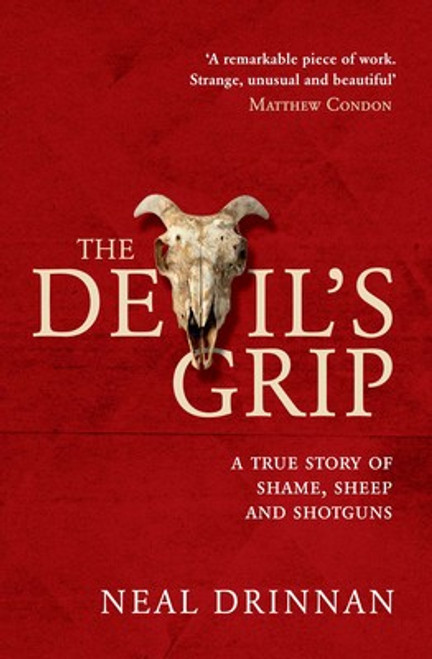 'Wake in Fright' meets 'Midnight in the Garden of Good and Evil' in this darkly compelling and provocative Australian true crime story.

Almost three decades later, the web of secrets and lies that led to this bizarre and seemingly motiveless murder spree are unravelled with the help of Bob Perry, Darcy Wettenhall's secret lover for a decade prior to his murder. From the bucolic majesty, privilege and snobbery of the Western District's prized pastoral lands and dynasties to the bleak, loveless underworld of orphanages, rodeo stables and homeless shelters, 'The Devil's Grip' is a courageous and thought-provoking meditation on the fragility of reputation, the folly of deception and the power of shame.

"This new book from Neal Drinnan is a complete departure for him, as it is his first non-fiction title - a mash-up of memoir and true crime. Though it is also quite different from a typical true crime - this is not one of those books that evaluates the facts and details, leading to a startling revelation. Yes, the book does examine the circumstances that led to the murder of Darcy Wettenhall and his family, but what this book does so brilliantly is to excavate the gay underside to the murder. Although the secret homosexual life of Darcy was revealed in the wake of the murders, this aspect has never been examined so comprehensively before, exploring the tyranny of the closet in a conservative rural community and the secrecy, fear and stigma around HIV/AIDS during this time. But what really elevates The Devil’s Grip is that Neal Drinnan has had the inside story from ‘the horse’s mouth’ - Bob Perry was the secret lover of Darcy for ten years and he cooperated extensively with the writing of this book. But Neal Drinnan does not confine himself simply to the story of the murder - he also includes considerable detail about himself, how he came upon this story, his friendship with Bob Perry, and also his ‘sea-change’ from the urban playground of Surry Hills, Sydney, to opening a bookshop in Colac, a small Victorian country town. The book is similar in style to the international bestseller Midnight in the Garden of Good Evil by John Berendt which also explored a murder involving gay men though set in the atmospheric Southern American city of Savannah. The rural backdrop against which all of this plays out is similarly atmospheric and will likely seem very exotic and almost like a foreign world to urban readers who know little about the intricacies of farming and breeding prize sheep in particular. They will probably also be stunned to learn of the vast sums of money that these stud sheep command! The Devil’s Grip is a remarkable new step in Neal Drinnan’s writing career but it is also a well-deserved and overdue return to working with a major Australian publisher after labouring as an indie author for almost a decade."  Reviewed by Graeme Aitken

Praise for 'The Devil's Grip':

''A remarkable piece of work. It is a strange, unusual and beautiful book with an incredibly unique setting. I don't think I've read anything quite like it. It is compulsive reading. True crime. Memoir. History. How do you live a life honestly and with dignity? It's difficult to categorise because it traverses so many genres. But it WORKS.'' Matthew Condon, author of the 'Three Crooked Kings' trilogy

'‘On its face this is the story of a family steeped in the pursuit of the perfect ram, but beneath the surface lies a riveting and ribald tale of lust, loss, manipulation, unbridled ambition and ultimately murder.'' Mark Tedeschi AM QC and author of 'Eugenia'

'‘An unforgettable, courageous and deeply tragic local story which manages to become a universal tale'' Gregory Day, author of 'Archipelago of Souls' and 'A Sand Archive'

'‘It's got it all: sex, domestic violence, ‘the land' - such an important concept resonating in the Australian mind - land-holders and property, privilege, prejudice, skulduggery and murder!'' David Bradford, author of 'The Gunners' Doctor' and 'Tell Me I'm Okay'.

The Contender: The Story of Marlon Brando