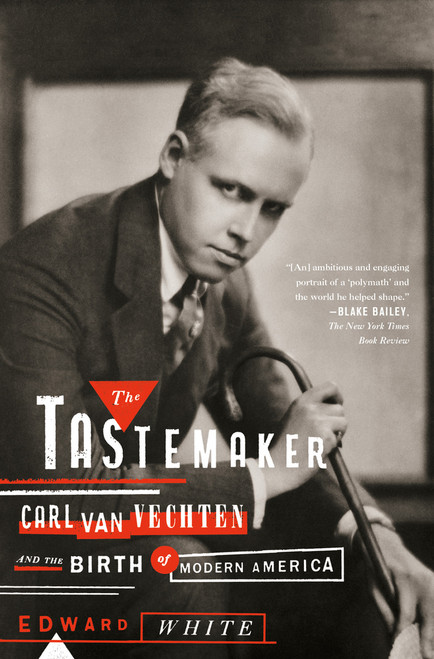 A revealing biography of the influential and controversial cultural titan who embodied an era.

The Tastemaker explores the many lives of Carl Van Vechten, the most influential cultural impresario of the early twentieth century: a patron and dealmaker of the Harlem Renaissance, a photographer who captured the era’s icons, and a novelist who created some of the Jazz Age’s most salacious stories. A close confidant of Langston Hughes, Gertrude Stein, George Gershwin, F. Scott Fitzgerald, and the Knopfs, Van Vechten frolicked in the 1920s Manhattan demimonde, finding himself in Harlem’s jazz clubs, Hell’s Kitchen’s speakeasies, and Greenwich Village’s underground gay scene. New York City was a hotbed of vice as well as creativity, and Van Vechten was at the center of it all.

Edward White’s biography - the first comprehensive biography of Carl Van Vechten in nearly half a century, and the first to fully explore Van Vechten’s tangled relationship to race and sexuality - depicts a controversial figure who defined an age. Embodying many of the contradictions of modern America, Van Vechten was a devoted husband with a coterie of boys by his side, a supporter of difficult art who also loved lowbrow entertainment, and a promoter of the Harlem Renaissance whose bestselling novel - and especially its title - infuriated many of the same African-American artists he championed. Van Vechten’s defense of what many Americans considered bad taste - modernist literature, African-American culture, and sexual self-expression - created a popular appetite for these quintessential elements of American art. The Tastemaker encompasses its subject’s private fears and longings, as well as Manhattan’s raucous, taboo-busting social scene of which he was such a central part. It is a remarkable portrait of a man whose brave journeys across boundaries of race, sexuality, and taste helped make America fully modern.