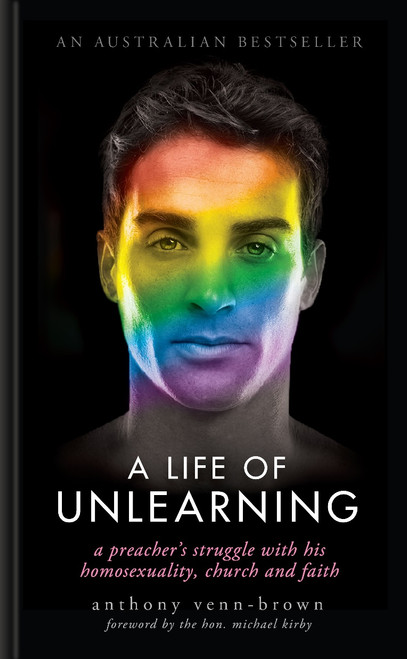 There comes a time comes when we have to face realities in life. For some, reality slaps them in the face - refusing to be ignored.

On the surface, everything looked perfect. Anthony Venn-Brown was a popular, high-profile preacher in Australia's growing mega-churches, such as Hillsong, and happily married father-of-two. Behind the scenes was a different story. Believing homosexuality made him unacceptable to God and others, a secret battle was being fought. After twenty-two years of struggle and torment, a chance meeting forced Anthony to make the toughest decision of his life. Tired of feeling torn and fragmented, he confessed and came out. Abandoned by his church and Christian friends Anthony began his life of unlearning; a lonely journey that made him who he is today.

This honest account highlights not only the costs of being true to yourself but that the rewards of authenticity and integrity are worth it.

As Anthony's story is ultimately about being true to one's self - whether you're gay or straight, religious or non believer - you’ll find relevance in this triumphant autobiography.

'Anthony shares his life with us with all the colour that a story-telling evangelist can capture. The honesty of his story is compelling. His story faces the hard issues, HIV/AIDS, suicide, sexual assault, relationships, marriage, parenting, domestic violence, loneliness, guilt, shame, rejection, love and sex. He has nothing to hide and it is refreshing. However, I can’t say you may not experience discomfort as the honesty in these pages invites you to be honest in your own life. Read it if you dare.'
Dr Wendell Rosevear

'Human stories, like the one in these pages, play a part in advancing understanding and acceptance. It is the story of his quest to find not only self-acceptance but one of the most powerful forces in nature—human love.'
The Honourable Michael Kirby AC CMG
Former Justice of the High Court of Australia
Member of the Global LGBT Forum

Born to Be Brad: My Life and Style, So Far

The Tiger & The Ruby : A Journey To The Other Side Of British India (previously available in US hardcover as Empire Made)

Born On A Blue day