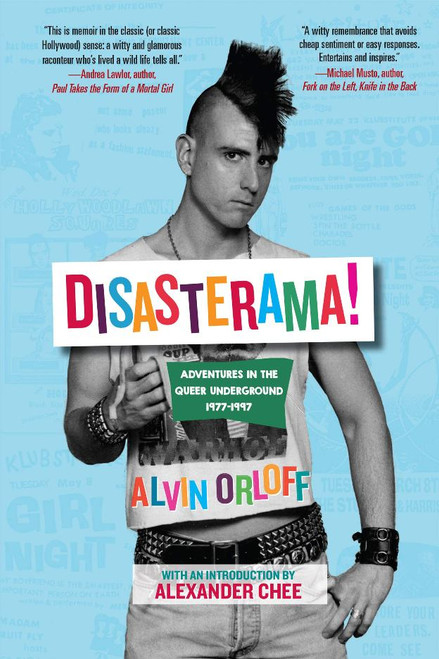 In Disasterama, Orloff recalls the delirious adventures of his youth―from San Francisco to Los Angeles to New York―where insane nights, deep friendships with the creatives of the underground, and thrilling bi-coastal living led to a free-spirited life of art, manic performance, high camp antics, and exotic sexual encounters, until AIDS threatened to destroy everything he lived for.

In his introduction, award-winning essayist and novelist Alexander Chee notes, "There’s a strange love I have for these times that can be hard to explain. How can I love what I lived through from a time that was as ‘bad’ as that? But as I read this, and those days came into view again, what I think of that love now is that there was a beauty to the beauty you found then that was made the more fierce by the horror of what was happening. If you could still find the worth of your life, still find sex, love, friendship, your own self-worth amid these attempts by the state at erasure and the ravages of the AIDS epidemic, then it had the strength of something forged in fire."

Orloff looks past the politics of AIDS to the people on the ground, friends of his who did not survive AIDS’ wrath―the boys in black leather jackets and cackling queens in tacky frocks―remembering them not as victims, but as people who loved life, loved fun, and who were a part of the insane jigsaw of Orloff’s friends. Disasterama showcases Orloff's wit and poignancy as he relays the true tale of how a bunch of pathologically flippant kids floundered through a deadly disaster, and, struggled to keep the spirit of camp and radicalism alive, even as their friends lost their lives to the plague.

Drag : Combing Through the Big Wigs of Show Business

Double Melancholy : Art, Beauty, and the Making of a Brown Queer Man