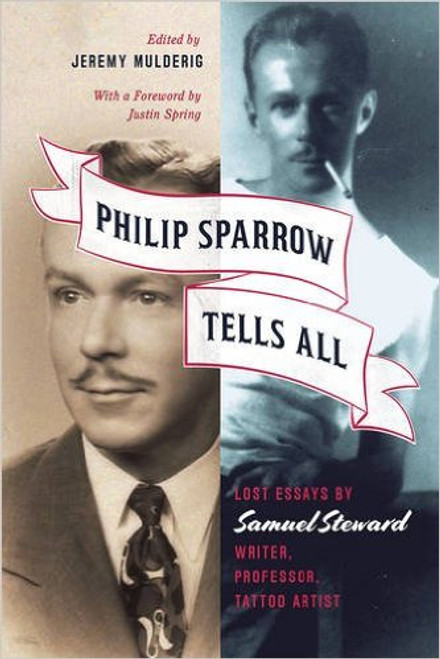 Samuel Steward (1909–93) was an English professor, a tattoo artist for the Hells Angels, a sexual adventurer who shared the considerable scope of his experiences with Alfred Kinsey, and a prolific writer whose publications ranged from scholarly articles to gay erotica (the latter appearing under the pen name Phil Andros). Perhaps his oddest authorial role was as a monthly contributor between 1944 and 1949 to the Illinois Dental Journal, an obscure trade publication for dentists, where writing as Philip Sparrow, he produced a series of charming, richly allusive, and often quirky essays on a wildly eclectic assortment of topics.

In ''Philip Sparrow Tells All', Jeremy Mulderig has collected thirty of these engaging but forgotten columns, prefacing them with revealing introductions that relate the essays to people and events in Steward’s life and to the intellectual and cultural contexts in which he wrote during the 1940s. In these essays we encounter such famous friends of Steward as Gertrude Stein, André Gide, and Thornton Wilder. We hear of his stint as a holiday sales clerk at Marshall Field’s (where he met and seduced fellow employee Rock Hudson), of his roles as an opera and ballet extra in hilariously shoddy costumes, of his hoarding tendencies, his disappointment with the drabness of men’s fashions, and his dread of turning forty. We go along with him to a bodybuilding competition and a pet cemetery, and together we wander the boulevards of Paris and the alleys of Algiers. Throughout, Mulderig’s entertaining annotations explain the essays’ wide-ranging allusions and also highlight their gay subtext, which constituted a kind of private game that Steward played with his mostly oblivious audience of Midwestern dentists.

The first collection of any of Samuel Steward’s writings to be republished since his death in 1993, ''Philip Sparrow Tells All'' makes these lost essays available to the broad readership that Steward imagined, but never actually reached, when he wrote them. In doing so, it takes a major step toward documenting his important place in twentieth-century gay literature and history.

Portrait of an Addict as a Young Man

Not My Father's Son : A Family Memoir (Paperback)