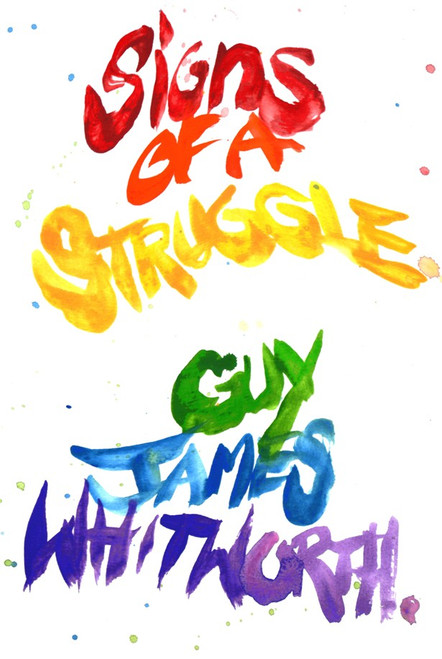 Signs of a Struggle illustrates the creative journey, from working class North East England to the current Queer-art scene of Sydney, through the eyes of award-winning artist Guy James Whitworth. Uniquely using the fierce and fabulous LGBTQI community of Sydney as a visual metaphor, Whitworth contemplate life’s challenges and triumphs. With dramatic backdrops including a troubled childhood, 80’s London in the midst of the Aids crisis, and activism for global transformation in the modern world, Signs of a Struggle takes the reader on an often intimate, raucous and also poignant journey through survival, queerdom, creativity and inspiration unlike any other.

"This thoroughly original book is a memoir like no other - Sydney artist Guy James Whitworth tells his story through a series of vibrant, colourful art works and his intimate reflections and anecdotes behind them. This loose structure might seems a bit limiting but Guy Whitworth has a very distinctive and engaging authorial voice and is also prone to some very entertaining digressions. So a colourful panel of 10 bicycle portraits unexpectedly leads to the author confiding his sex work past - as a short-lived rent boy in Earls Court, London, and then to a more successful career as a phone sex operator. This enabled him to create a cast of characters from Larry the lust Lollipop man to Jeremy the strict Naval Officer, though he does feel slighted that the escort agency suggested he move into phone sex - ’a little like being told you have the perfect face for radio.’ This witty self-deprecating tone is one of the book’s great strengths, though Whitworth also addresses serious matters. In the same chapter as the sex work, he also talks about the death of his father and the challenges of being an artist and the risks of being exploited. The book opens with a splash as Guy embraces his gender non-conforming identity and confesses his love of wearing make-up - ‘For me to feel confident and complete, then a little highlighter under my eyes, a sweep of blush, lashes of lashes and a couple of say something eyebrows need to be firmly in place.’ There are portraits of some well-known Sydney identities such as photographer William Yang and activist Peter de Waal, of his boyfriend Ryan, various female, trans, and gender non-confirming friends, and several stunning self portraits. It is also a delight to see the return of publisher Cloud of Magellan Press and what a triumphant return with this distinctively different and utterly captivating book."