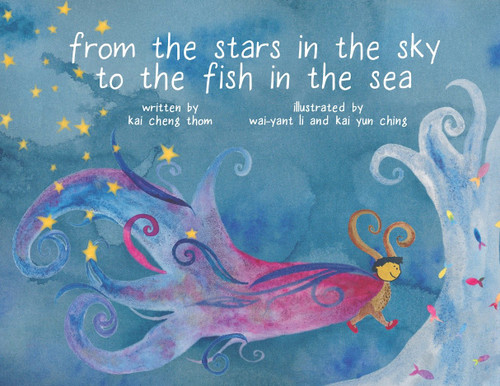 In the magical time between night and day, when both the sun and the moon are in the sky, a child is born in a little blue house on a hill. And Miu Lan is not just any child, but one who can change into any shape they can imagine. The only problem is they can’t decide what to be: A boy or a girl? A bird
or a fish? A flower or a shooting star? At school, though, they must endure inquisitive looks and difficult questions from the other children, and they have trouble finding friends who will accept them for who they are. But they find comfort in the loving arms of their mother, who always offers them the same loving refrain: “whatever you dream of / i believe you can be / from the stars in the sky to the fish in the sea.”

In this captivating, beautifully imagined picture book about gender, identity, and the acceptance of the differences between us, Miu Lan faces many questions about who they are and who they may be. But one thing’s for sure: no matter what this child becomes, their mother will love them just the same.

Kai Cheng Thom is a writer, performance artist, and psychotherapist in Toronto. Her first poetry book, a Place Called No Homeland, was published in 2017.

Kai Yun Ching is a community-based organizer, educator, and illustrator in Montreal.

Wai-Yant Li is a ceramics artist and illustrator in Montreal.

This book's themes can resonate with any child who feels excluded (or excludes others) and can also open up conversations about nonbinary gender identities. A relevant tale of love and acceptance that can find a home in any children's collection. —Kirkus Reviews

An exquisitely rendered picture book about gender and identity ... The illustrations, by Wai-Yant Li and Kai Yun Ching, are saturated with colour and sparkling with invention, and Thom’s gentle, rhythmic text resonates like a wise old fairy tale that has been told and retold, and like the mother’s song, passed down from one generation to the next. —Quill and Quire (STARRED REVIEW)

It's important for youngsters questioning their gender to see themselves in literature, and for other kids to see and more or less accept that fluidity. More generally, Mui Lan is always changing, and that sounds like the way all kids should be. —Montreal Review of Books