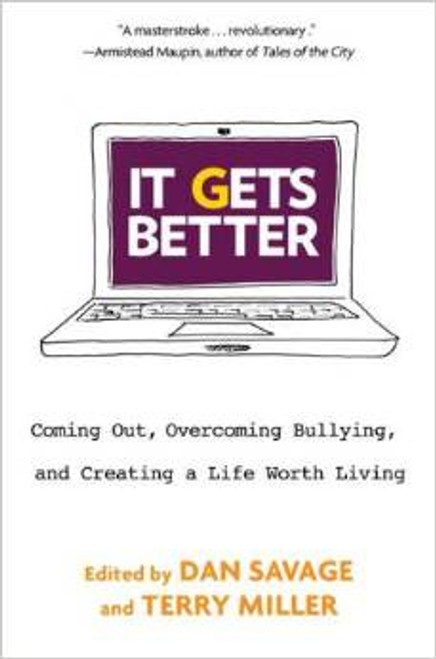 Growing up is not easy. Many young people face daily tormenting and bullying. And this is especially true for the LGBT kids and teens. In response to a number of tragic suicides by LGBT students. syndicated columnist and author Dan Savage uploaded a video to YouTube with his partner, Terry Miller. Speaking openly about the bullying they suffered. and how they both went on to lead rewarding adult lives. their video launched the It Gets Better Project YouTube channel and initiated a worldwide phenomenon.It Gets Better is a collection of original essays and expanded testimonials written to teens from celeities. political leaders. and everyday people. because while many LGBT teens can't see a positive future for themselves. we can.

On September 22, 2010, in response to well-publicized incidents of gay youth being bullied and then committing suicide, well-known author Dan Savage and his husband, Terry Miller, uploaded a video to YouTube called "It Gets Better," speaking openly about the bullying they suffered when they were teens themselves, and assuring teens and youth that things would get better if they could just hang on. They hoped to get other people to contribute similar messages of support, and thought that they might get about 100 other videos in this collection.

Within 24 hours, someone uploaded a second video. In 3 days, there were several hundred videos. At the end of the week, there were 1,000. In week 4, the White House called with a request to add a video from President Obama. There are now more than 10,000 videos in the It Get's Better collection.

About 1% of these were selected and transcribed and combined with expanded and original essays to present these messages in written form. The themes of the essays are why gay, bi, questioning, outsider, bullied, or any other youth should not kill themselves or be self destructive, since their lives will and do get better. The book includes resources and suggestions, and should be read by teachers, librarians, youth workers, parents, and of course, youth.

There is something for nearly everyone: Jennifer Finney Boylan, a transgender woman who teaches at Colby, writes about a post-college incident where she drove to the literal edge of North America to end her life from a cliff (but didn't); Gregory MaGuire, the author of "Wicked" writes an essay; while Kevin Yee, an actor in the musical, "Wicked," also writes one. It is one of the funniest essays in the book. He was in a boy band (Youth Asylum), and the producers, thinking he did not seem macho enough, dyed his hair blond, told him to mumble when talking, wear baggy pants, and walk more butch. The band did not survive, but he did, and it got better. Urvashi Vaid (partner of Kate Clinton) writes about why teens whould take more Action; and Bishop Gene Robinson writes about god's love, religion, true religion, and how it gets not only better but continues to get better.

Brinae Lois Gaudet in Wisconsin, just one year out of high school, writes about finding a safe zone in a college dorm (in high school, a local citizen forced Gaudet's high school to take down "safe zone" signs). Alez R. Orve of Mexico City and Vancouver writes in Spanish about life in Mexico and Canada; Mark Ramirez (Anchorage) submitted his essay in ASL sign language; and another young man submitted an essay in Arabic.

Military bound? Lance Corporal James Wharton in London writes of life in the British Army and how he was married to his partner in a military barracks and was recently the cover pic of the UK's army magazine. Literary? Award winning novelist, Michael Cunningham, author of "A Home At The End of the World," about a gay teen's crush on a straight friend, writes about confronting childhood friends and coming out on NPR;

and coming out on NPR; and Alison Bechtel submits an essay in the form of a cartoon. Broadway? 22 Broadway actors tell snippets of their stories in one essay; while A. Y. Daring, a black lesbian choreographer for Lada Gaga write about life in Ontario. David Sedaris submitted an original essay to tell readers to keep journals. He adds that people who are good to you make for lousy stories, while all those bullies will make for good, future stories.

Jakes Shears (Jason Sellards) who, with Scott Hoffman, makes up the Scissor Sisters (which is touring with Lady Gaga) submits an essay on coming out at age 15, but being bullied badly and having his school principal blame him for his own abuse (it was so bad, he moved schools). Yet, he found success and happiness after graduation.

Rabbi Sharon Kleinbaum, the senior rabbi at Congregation CBST in Manhattan, is in the book with an essay on religion, god, and bullying; and Jules Skloot, a Brooklyn based dancer and choreographer, graduate of Hampshire and Sarah Lawrence, and a member of Jews with Tattoos includes a story. Six gay Orthodox Jewish young men have a group essay in which they discuss life growing up in Orthodox, Haredi, and Hasidic homes and Jewish summer camps, their survival at these institutions, and their current, happier and productive lives. Barbara Gaines, 53, the Executive Producer of the "Late Show with David Letterman" writes of growing up on Long Island, playing clarinet in the school band, and attempting suicide after college. But had she died in 1979, she would have missed out on the rest of a fabulous life, her partner, and their child. Adam Roberts, a graduate of Emory and a star of the Food Network and the Amateur gourmet flog (food blog) site writes a hilarious essay on cooking a Friday night meal for his parents, his partner, and his partner's parents. In between recipes and tangential asides on food, he discusses being bullied in school, and finding how to express himself in a comedy troupe in college. As he says, high school is like a cold depressing tv dinner, but it gets better and you might end up as a plated dish of braised (braised!!) short ribs with polenta. Michael Feinstein (a piano player) has an essay, as does Suze Orman, 60, a financial advisor and proud lesbian who says life is NOT EASY, but it is all worth the struggle! (She is very demonstrative.)

Chasing the Scream : The First and Last Days of the War on Drugs

A Spy Among Friends : Kim Philby and the Great Betrayal