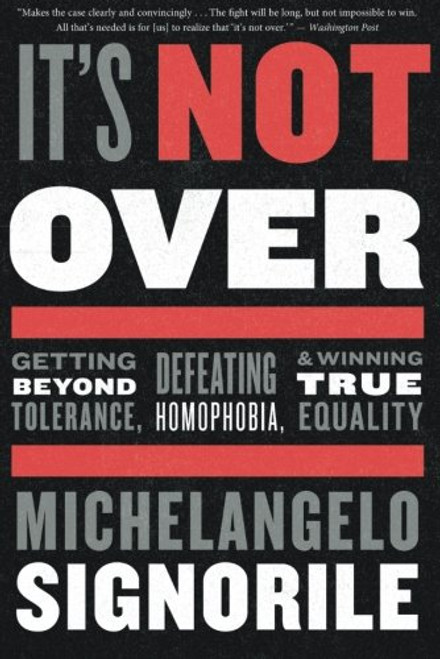 In ''It’s Not Over'', pioneering journalist Michelangelo Signorile boldly confronts the challenges that lie ahead for LGBT people fighting for their equal rights. Drawing on provocative new research into the psychological roots of prejudice, he shatters myths and ranges through Washington, Hollywood, Silicon Valley, and beyond to reveal the truth about the battles to come. Urgent, impassioned, and ultimately hopeful, ''It’s Not Over'' is the must-read book for anyone who cares about the future of LGBT rights.

This paperback edition is updated with a new Afterword.

“Makes the case clearly and convincingly . . . The fight will be long, but not impossible to win. All that’s needed is for the LGBT community to realize that ‘it’s not over.’¹” — Washington Post

“Visionary . . . Prescient . . . Signorile has brilliant advice for the future.” — Advocate

“Exquisite[ly] tim[ed] . . . Even with marriage equality ascendant in nearly all corners of the US, the fight for real equality is not over. The most serious threat the gay rights movement faces may in fact be what Signorile calls ‘victory blindness,’ or ‘the dangerous illusion that we’ve almost won.’” — American Prospect

“For twenty-five years, Michelangelo Signorile has been one of America’s most incisive critics and influential activists in the movement for gay equality, and ''It’s Not Over'' demonstrates he is better than ever . . . A penetrating look at one of the great social movements of our time . . . Razor-sharp . . . Stirring.” — Glenn Greenwald, The Intercept

“Few calls to action are as necessary as the one in [It’s Not Over] . . . I can’t urge it enough on people.” — Alexander Chee, Literary Hub