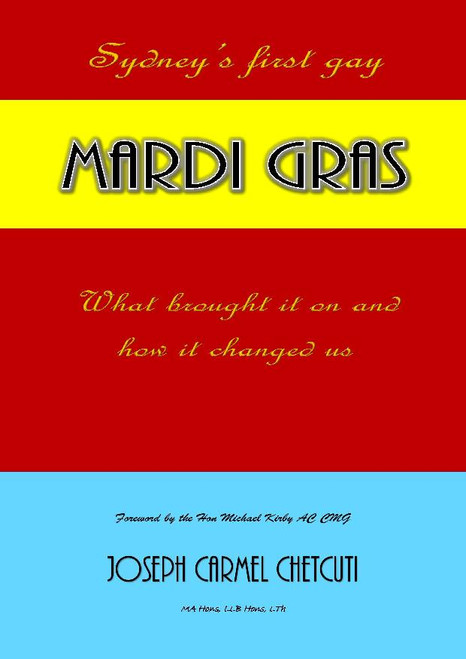 ''Sydney’s First Gay Mardi Gras : What Brought It On and How It Changed Us" is the first book of its kind to provide a detailed account of the Who, Where, When, Why and How of what happened on 24 and 25 June 1978. The account draws on a wide range of documents and statements of 78ers and others. The book is not for the faint-hearted, blowing the whistle on misinformation that has been promoted and embraced as ‘revealed truth’ and questioning a litany of myths that has mushroomed around Sydney’s first gay Mardi Gras. What you thought you knew about this first gay Mardi Gras may well turn out to be nothing more than a figment of someone’s fertile imagination.

The book is written by Joseph Carmel Chetcuti, a barrister and solicitor in Victoria, with qualifications in law, political science and theology. Chetcuti came out in late 1972 when he became a member of Cross+Section, a subgroup of the Campaign against moral persecution (CAMP). He is also a 78-er, having participated in the morning march of 24 June 1978, the Mardi Gras of 24 and 25 June 1978, the Fourth National Homosexual Conference of 27 August 1978 and other events.

The Hon Michael Kirby AC CMG wrote the foreword to the book. ‘It is by exploring these themes’, writes Kirby, ‘that Joseph Chetcuti has done a service for all Australians. His book travels far beyond the LGBTIQ community in New South Wales. He had chronicled a change that occurred in one small part of the world’s surface. He has rightly insisted that the changes that have happened cannot be laid solely at the door of events that took place on a single night or even in the months and years that followed. Nor can the actors in the dramas of 1978 be viewed as divorced from countless others, in Australia and the world ... A realisation of these truths will make Australian readers of this book more conscious of the needs for self-criticism at home and engagement with, and support of, those still struggling overseas’.